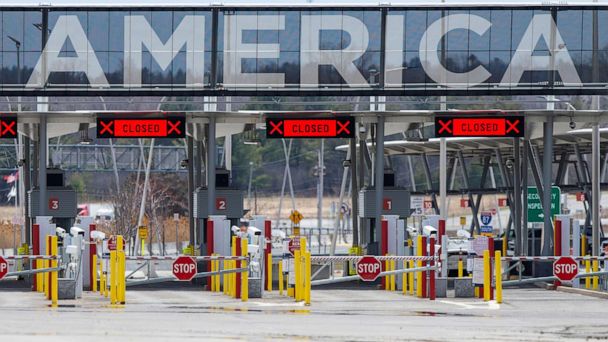 U.S. Customs and Border Protection said Wednesday it has seen a 1,000% spike in drugs seized along the northern border this year.

The agency seized nearly 40,000 pounds of marijuana across 16 ports of entry worth between $100 million and $120 million, according to Aaron Bowker, supervisory CBP officer and public affairs liaison.

Kevin Kelly, the special agent in charge of the Homeland Security Investigations (HSI) Buffalo field office, told ABC News that the uptick is due in part to the legalization of marijuana in Canada this year.

HSI is the investigative arm of the Department of Homeland Security.

"Since March 16, we've seen a huge uptick in marijuana seizures at the ports of entry," Kelly said.

There is a lot of money to be made on the black market and, according to Kelly, there are multiple actors carrying out the smuggling.

Kelly said the groups smuggling drugs into the U.S. through Canada are more "symbiotic" versus the cartels along the southern border fighting for territory.


The Buffalo CBP office said it has seized over 260 pounds of counterfeit prescription drugs such as Xanax. CBP officials worry that Americans may accidentally buy and ingest these fake pills, leading to serious harm.

"It's a large concern and to see the brazen attempts of the amount that [criminals] try and send in, when they do send it, it just means [criminals] will not stop doing it," Bowker explained.

Kelly said officials are starting to see an alarming trend in how these counterfeit drugs are made.

"They're supplementing the binder, which is the product that holds it together, with fentanyl and other byproducts," he said.

Bowker said there has been an uptick in gun seizures along the border too.