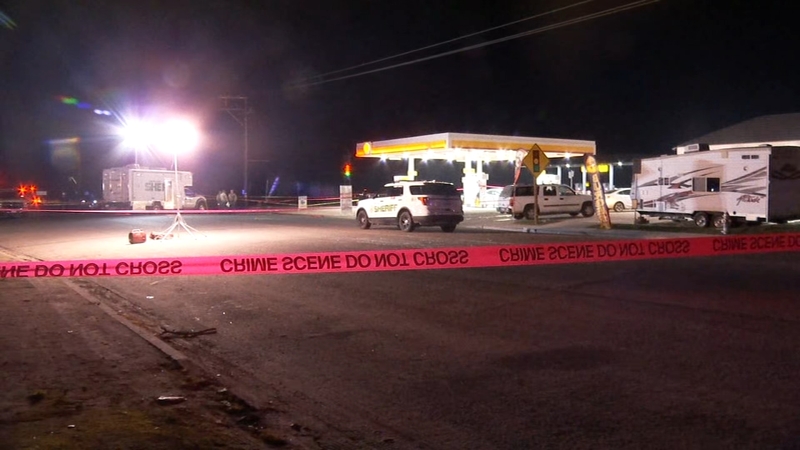 TULARE COUNTY, Calif. (KFSN) -- Arrests have been made in the brazen South Valley shootout.

The Tulare County Sheriff's Office says it all started with rival gangs showing up to the same gas station, at the same time.

Investigators say it's amazing no bystanders were injured or killed in this shooting.

"This is not something you see on a regular basis. For these guys to be that brazen and to do this in broad daylight is really outside the norm," said Tulare County Sheriff's Office Sgt. Bryan Clowers.

The aftermath of a deadly shooting in Ducor can be seen across the street from where it happened.

A tire shop was hit with gunfire at least two times.

Just across the street from the gas station where the shooting happened, a truck parked at a business was hit by the gunfire. @ABC30 pic.twitter.com/wMHACb3M4K

A bullet struck the side of the building and also hit a truck parked on the lot.

The Tulare County Sheriff's Office has since arrested three people for the shooting that happened just before 4 p.m. Thursday afternoon at the Ducor Handy Mart gas station along Highway 65.

Detectives say their investigation showed Francisco Rodriguez, 20, and Jaan Maciel, 21, of Ducor arrived in a white Chevy Malibu. At the same time, Jose Palomo, 35, Mauro Aguilar, 32, and a 17-year-old boy, all from Delano, arrived in a red Nissan Altima.

The sheriff's office says the two groups are from rival gangs and almost immediately got out of their cars and started firing at one another.

Detectives say Francisco Rodriguez, 20, and Jaan Maciel, 21, of Ducor were in a Chevy Malibu.
Jose Palomo, 35; a 17yo boy and Mauro Aguilar, 32, all of Delano were in a Nissan Altima.

All of them got out and started shooting at each other.

"Basically just coincidental that they happen to arrive at the same place at the same time," said Sgt. Clowers.

Rodriguez and Aguilar both died. The other three involved were all injured.

The 17-year-old has been released from the hospital and booked into the Tulare County Juvenile Facility for the murder of Rodriguez.

Palomo remains hospitalized and has also been arrested for Rodriguez's murder.

Maciel is still receiving care, he has been arrested for the murder of Aguilar.

"Both sides have culpability in this crime. You can't just begin shooting at a public place. There's really no justification for the way this went down." Sgt. Clowers said.

Detectives say they're still looking for one more person who may have been a witness or a suspect.