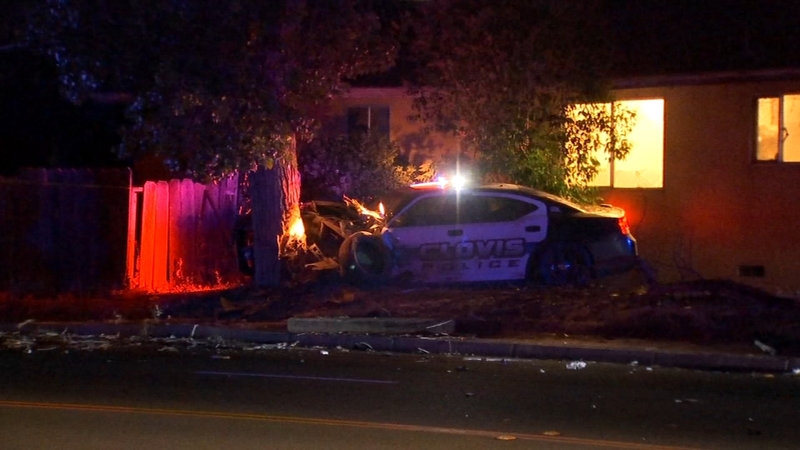 CLOVIS, Calif. (KFSN) -- A tree, although severely damaged remains standing despite being involved in a DUI crash Thursday night.

According to the California Highway Patrol, a driver ran into a Clovis Police car at the intersection Minnewawa and San Jose, causing it to jump a curb, hit a pedestrian and slam into the tree and nearby fence.

"Anytime an accident like this happens, it is a weird set of coincidences," said Clovis Police Chief Matt Basgall.

Investigators believe the driver was under the influence of alcohol when she ran the stop sign and hit the patrol vehicle.

"Anytime there's a DUI related type of crash like this it is fortunate but were actually very lucky that the injuries weren't worse to the pedestrian and officer."

The man who was hit while walking remains in the hospital with a broken leg. The Clovis PD officer meantime has been released and is expected back to work on Monday.

"He mainly just suffered some bruises and some scraps some scratches, you know, kind of shook up at the whole event."

The female driver that crashed into the squad car was taken into custody and faces felony DUI charges.

"We're always putting the message out there don't drink and drive. Take an Uber, take a Lyft. It is just sad that we're still talking about people drinking and driving."

This is not the first accident to take place at this intersection. Neighbors say the area has always been dangerous to traffic.