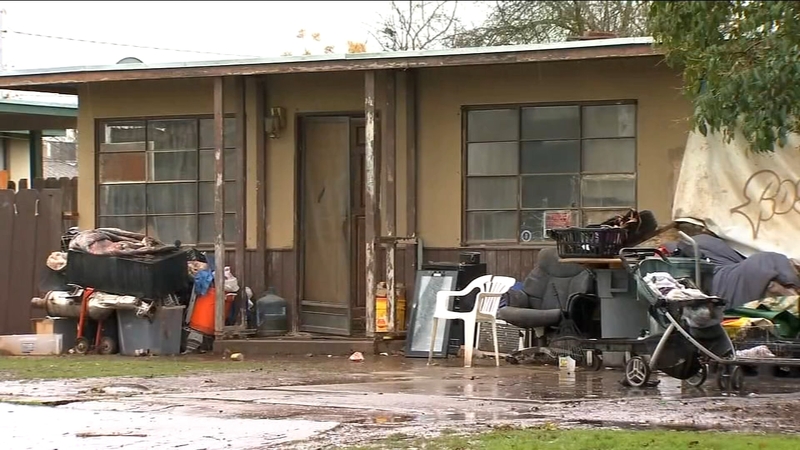 MERCED, Calif. (KFSN) -- After months of living in a trailer, Robert Alexander is finally moving into his new home.

"There's no excuse for whats next door," he said.

What he wasn't expecting was to see his backyard filled with piles of trash and debris, and what he saw next door was even worse.

"I looked over the fence, and I couldn't believe what I saw. It's nothing but garbage," Alexander said.

A viewer sent us a photo of the backyard of this Merced home along East 23rd Street.

Scott Jewell says he's had to deal living near this house for about 6 years.

"The smell sometimes. They leave shopping carts and garbage across the street. Buckets of human waste along sidewalks," Jewell said.

Merced police say the homeowner owns the property, and still lives inside despite there not being any water or electricity.

The department started a full-time case in back 2016 based on the hundreds of complaints they received from neighbors.

Lieutenant Alan Ward says the homeowner used to be cooperative, but lately that hasn't been the case.

"We've had to go back with our code enforcement officers and our DART team because of the number of people, and the threats. He's made threats to hurt officers and people that come to the house," he said.

Ward says the home was boarded up in the past, however, he believes at least 12 people are currently living on the property in tents.

Since citations are not working and it's now a health issue, there's a few options left.

"It's going to go to the city attorney where we'll ask for an abatement warrant, or have it assigned to receiver so the court can fix the problem," Ward said.

Longtime residents say they're tired of dealing with it, and new neighbors hope it gets cleaned up.

"Coming into this, its better than a trailer...but barely," Alexander said.