Ecuador accuses Assange of using embassy as a 'center for spying' 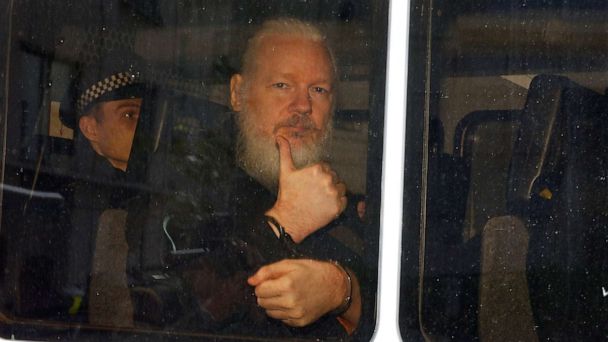 LONDON -- The president of Ecuador has claimed that WikiLeaks founder Julian Assange used the London embassy that was his home for seven years as a "center for spying," as new footage emerged of the controversial whistleblower's life inside the embassy.

President Lenin Moreno, in an interview with The Guardian, also said that Assange's activity inside the embassy violated the terms of his asylum conditions.

"Any attempt to destabilize is a reprehensible act for Ecuador, because we are a sovereign nation and respectful of the politics of each country," Moreno told the newspaper in an email. "It is unfortunate that, from our territory and with the permission of authorities of the previous government, facilities have been provided within the Ecuadorian embassy in London to interfere in processes of other states."

"We cannot allow our house, the house that opened its doors, to become a center for spying," he added. "This activity violates asylum conditions. Our decision is not arbitrary but is based on international law."

Moreno also reiterated the claim made by the Ecuadorean government that Assange's hygiene and behavior constituted an "aggressive campaign against Ecuador" from inside the embassy.

"He maintained constant improper hygienic behavior throughout his stay, which affected his own health and affecting the internal climate of the diplomatic mission," Moreno said.

Meanwhile, bizarre footage of Assange skateboarding inside the Ecuadorean embassy has been obtained by the Spanish newspaper El Pais. According to the newspaper, Assange behaved "eccentrically" and security guards who had dealings with Assange between 2012 and 2017 corroborated the claims made regarding his hygiene.

A longtime associate of the whistleblower, however, told ABC News that he had not seen any evidence of lack of hygiene while visiting Assange, casting doubt on the Ecuadorean government's version of events.

In an interview for ABC News' "The Investigation" podcast, war documentary filmmaker Sean Langan said life inside the embassy had been "like a gilded cage" for Assange.

Langan spent over 50 hours with Assange inside the embassy last year. He said he did not find an apartment littered with cat dropping or feces on the wall -- as alleged by his Ecuadorian hosts -- but instead Assange lived in "claustrophobic" quarters.
Report a correction or typo
Related topics:
abc newsnational
Copyright © 2021 ABC News Internet Ventures.
More Videos
From CNN Newsource affiliates
TOP STORIES