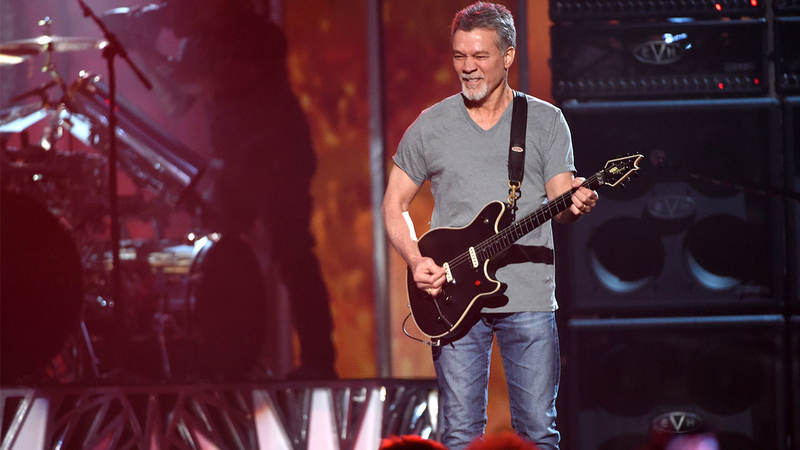 Eddie Van Halen, the guitar virtuoso whose blinding speed, control and innovation propelled his band Van Halen into one of hard rock's biggest groups, fueled the unmistakable fiery solo in Michael Jackson's hit "Beat It" and became elevated to the status of rock god, has died. He was 65.

With his distinct solos, Van Halen fueled the ultimate California party band and helped knock disco off the charts starting in the late 1970s with his band's self-titled debut album and then with the blockbuster record "1984," which contains the classics "Jump," "Panama" and "Hot for Teacher."

Van Halen is among the top 20 best-selling artists of all time, and the band was inducted into the Rock and Roll Hall of Fame in 2007. Rolling Stone magazine put Eddie Van Halen at No. 8 in its list of the 100 greatest guitarists.
EMBED More News Videos

Sandy Kenyon has more on the life and legacy of legendary guitarist Eddie Van Halen.

Eddie Van Halen was something of a musical contradiction. He was an autodidact who could play almost any instrument, but he couldn't read music. He was a classically trained pianist who also created some of the most distinctive guitar riffs in rock history. He was a Dutch immigrant who was considered one of the greatest American guitarists of his generation.

The members of Van Halen - the two Van Halen brothers, Eddie and Alex; vocalist David Lee Roth; and bassist Michael Anthony - formed in 1974 in Pasadena, California. They were members of rival high school bands and then attended Pasadena City College together. They combined to form the band Mammoth, but then changed to Van Halen after discovering there was another band called Mammoth.
EMBED More News Videos

"He was the best father I could ever ask for. Every moment I've shared with him on and off stage was a gift," Eddie Van Halen's son said.

Their 1978 release "Van Halen" opened with a blistering "Runnin' With the Devil" and then Eddie Van Halen showed off his astonishing skills in the next song, "Eruption," a furious 1:42 minute guitar solo that swoops and soars like a deranged bird. The album also contained a cover of the Kinks' "You Really Got Me" and "Ain't Talkin' 'Bout Love."

Mike McCready of Pearl Jam told Rolling Stone magazine that listening to Van Halen's "Eruption" was like hearing Mozart for the first time. "He gets sounds that aren't necessarily guitar sounds - a lot of harmonics, textures that happen just because of how he picks."