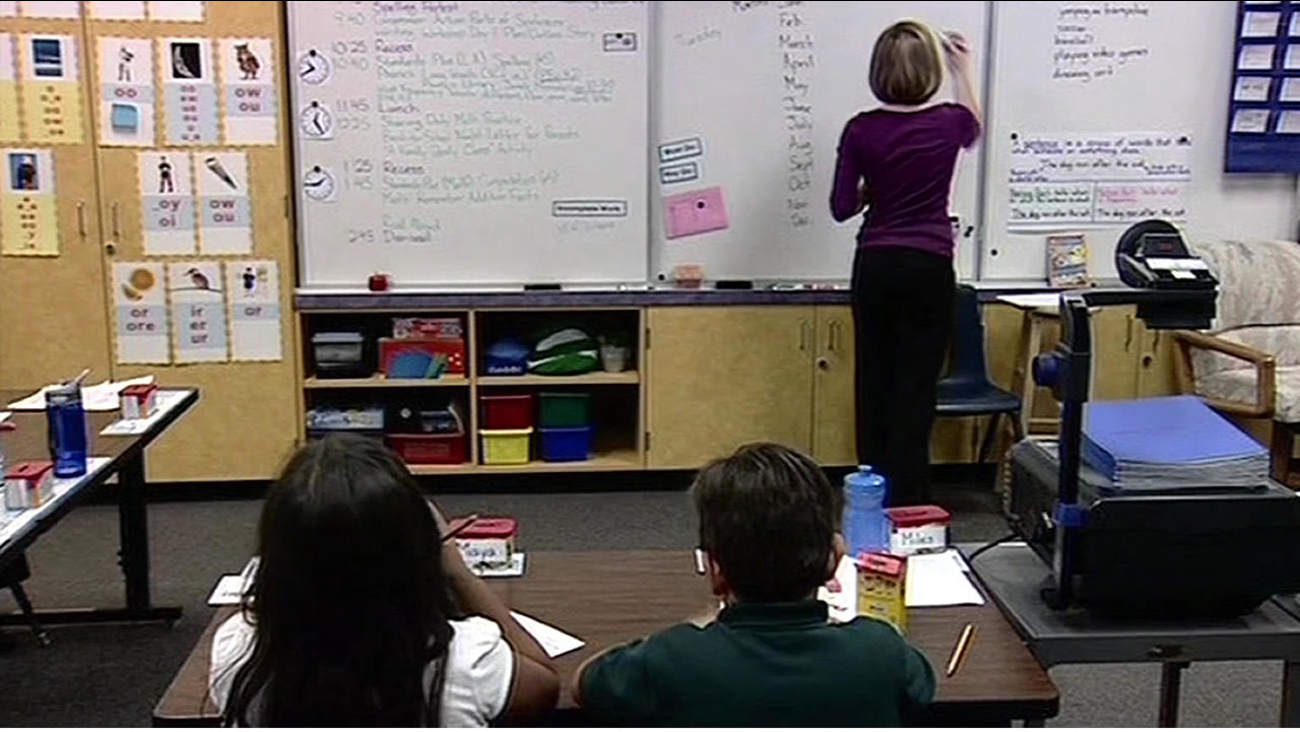 FILE - A teacher is seen instructing a class in this undated image. (KGO-TV)

SACRAMENTO, Calif. -- California student performance in math and reading has stagnated while wide achievement gaps for black, Hispanic and low-income students persist, according to results released Wednesday from a federal exam taken by students across the United States.

Average scores for fourth- and eighth-grade California students in math and reading were nearly the same in 2015 as in 2013. In both tested subjects, California's scores were five to eight points lower than the nationwide average for public school students.

Meanwhile, performance gaps between black, Hispanic and white students in reading remained as wide in 2015 as they were in 1998. In math, the gap between black and white fourth-grade students has narrowed by about 10 points since 2000.

"It's difficult for any Californian to be encouraged by the fact the scores have not improved very much over the last 20 years," said Tom Loveless, a senior fellow with the Brookings Institution.

Nationwide, average scores for fourth and eighth-grade math declined. In reading, fourth-grade scores remained flat while eighth-grade results dipped. Leaders with the board that oversees the test's administration cautioned against drawing conclusions that the results were part of a downward trend. They noted 2015 scores are the first in which scores have dropped and also come as schools are undergoing significant changes as they implement the Common Core standards.

"It's not a multi-year trend that we're seeing," said William Bushaw, executive director of the National Assessment Governing Board, which oversees the test.

The scores also come amid renewed debate over whether U.S. students spend too much time taking exams. A recent study by the Council of the Great City Schools found students in the nation's big city school districts spend an average of 20 to 25 hours a year taking standardized tests. President Barack Obama has called for capping standardized testing at 2 percent of classroom time. The study found testing amounts to about 2.3 percent of classroom time for the average eighth-grade student.

The National Assessment of Education Progress - also known as The Nation's Report Card - has been administered since 1969 and tests students on a wide range of subjects, making it possible for parents, teachers and school leaders to compare performance across time and states.

California's 2015 scores ranged from five to eight points lower than the nationwide average in math and reading. While overall scores were flat, they have inched up over the last 15 years, with the biggest rise being seen in fourth-grade math, where average scores have jumped from 213 in 2000 to 232 this year.

Loveless said California's demographics - including nearly 1.4 million students classified as English language learners - make it difficult to pinpoint the impact of the state's school system versus other social and economic factors on results. In three of the state's largest school districts - Fresno, Los Angeles and San Diego - achievement gaps between black, Hispanic, and white students have remained largely unchanged or even widened.

In San Diego, there is a 37 point difference between average fourth-grade math scores for black and white students. That's a gap that has grown 10 points between 2003 and 2015.

In Los Angeles and San Diego, the performance gap between students who qualify for free or reduced-price lunch - a key indicator of poverty - and their more affluent peers has grown across several grades and subject areas.

"There is a sobering persistence of gaps," said Ryan Smith, executive director of Ed Trust-West, a nonprofit working to close the achievement gap. "So while we celebrate the bright spots, this should be a call to action for us to fully commit to equity in California schools."
Related topics:
educationsan franciscolos angelessan mateosan rafaelsan josefresnocalifornia department of educationschool testingu.s. & worldteachersstudentscaliforniatests
Copyright © 2020 by The Associated Press. All Rights Reserved.
CALIFORNIA