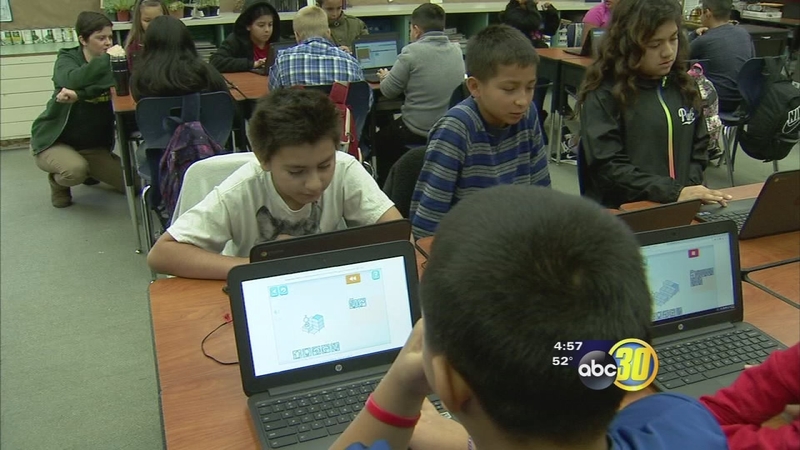 FRESNO, Calif. (KFSN) -- Students in northwest Fresno are getting a behind the scenes look at gaming. Central Unified is taking part in the nationwide Hour of Code.

At first glance, it may look like fourth and fifth graders at Teague Elementary School are playing Minecraft or other apps on laptops. But in reality, they're creating the games.

"I was making a house and now I'm mining, and then I moved onto the next level. But I don't know what the next level is now," 5th grader Ariana Rincon said.

"First I played Minecraft," 5th grader Viktor Linares said. "Everything was easy, but I got stuck on a few things like placing blocks."

Viktor is one of thousands of students participating in Central Unified's Hour of Code. The global event is kicking off this week and encourages school districts to introduce students to computer science through the non-profit code.org.

Linares loves playing Minecraft at home. He said it was neat to find out how the game comes to life.

"My favorite thing about is when we controlled the iron gollum and attacked the zombies," Viktor exclaimed.

Central Unified teacher Alexis Freeman says her students are having so much fun learning, they don't even realize they're acquiring new skills.

"I think it's important because this is a 21st-century skill," she said. "So, you're hearing a lot now about the jobs available and they're not the same jobs that existed 10 years ago or even some five years ago."

Most important, though, is the exposure to this type of technology. Even an hour a day of coding can go a long way.

"We're trying to prepare them for the skills they're going to need going out into the society that's going to exist when they're ready to get their job and this is definitely going to be valuable knowing the language of programming coding," Freeman explained.