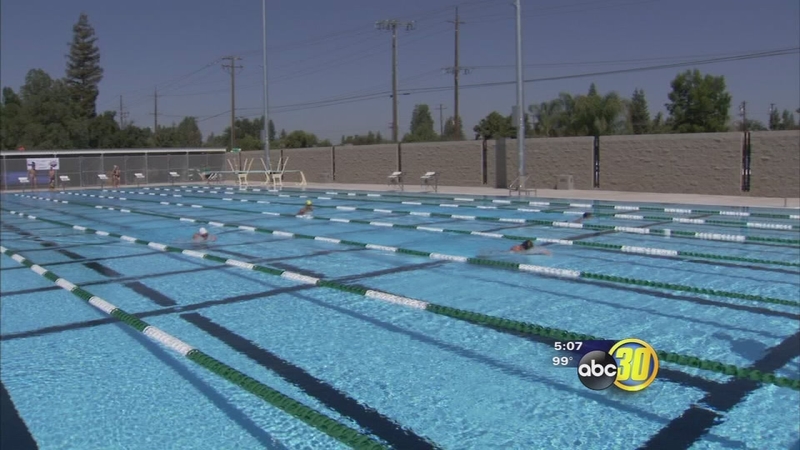 2000 silver medalist Kristy Kowal made a stop at Reedley High School to celebrate the opening of a new $7 million aquatics center.

Dozens of people gathered on campus for an Olympic-style ceremony to mark the grand opening of a new 50-meter Olympic-sized pool.

"This pool, when I walked in and saw the awesome job the community has done in just being able to raise the funds and build this pool it's amazing," said Kristy Kowal.

The two-time world champion breaststroker tested it out against a group of high school swimmers in the very first race at the new facility.

"My team did," answered Jarod Dodge.

"So you beat an Olympian today? How does that feel?" asked Mumma.

"That's kind of normal for me, I do that on a day-to-day basis, but beside that it was pretty nice," joked Dodge.

The new pool means a new start for Reedley aquatics. For the first time ever, the community will be able to host big swim meets like the Junior Olympics, Valley Time Trials and CIF League Finals.

"We're going to have home meets now; we're not just going to be an away team that's traveling to every swim meet to another school. Maybe now we'll have a home pool advantage," said Kristopher Shamp.

"It's really nice, it's big enough that I think you can have at least two or three groups using it at the same time," said former Head Coach Laure Gross.

Gross said he never thought he'd see a pool this spectacular built in his lifetime, let alone swim in it. When he was hired as varsity swim coach back in 1973, he was told he'd get a new pool within the next two years. But that promise was put on hold for nearly four decades, due to budget cuts and other district needs.

"I'm just thankful the community has this and pulled through and finally Reedley High School has a pool on campus. Kids are actually going to learn how to swim and that will be real sweet," said Gross.

The project was made possible by the Measure K school facility bond approved by voters in 2012. Dr. David Carter was instrumental in gaining support for the measure and collected nearly 500 signatures in support of building a new pool.

"Ten months ago at the groundbreaking for this aquatics complex, we closed our eyes, we took a deep breath and we imagined this beautiful chlorine aroma! Isn't it wonderful?" he said.

Both pools are lined with black stripes for swimming lanes, equipped with touch pads for electronic timing during competitions and include equipment for handicap access.

"This aquatics complex can now provide for the aquatics needs of Reedley and its surrounding communities for many years to come," said Carter. "This includes high school swimming and dive teams for Reedley and Immanuel High Schools, swim classes and to teach water safety to all Kings Canyon Unified School District students is now possible and summer swim programs such as the Reedley Marlins Recreational Use Swim Team will return next summer stronger than ever."

A state-of-the art facility sure to make a splash when students go back to school on Monday.

"I like the size. It's a 50-meter pool. Most schools don't have that even the newer pools around here so it's a luxury," said Dodge.

"My favorite feature is the diving blocks. They have a pirate on it. I mean, that's our mascot on the blocks. That's really cool and the adjustable fin; competition level blocks so definitely cool," said Shamp.

The residents of Reedley had been without an aquatics complex since the closure of the pool at Reedley College and the city of Reedley pool, nearly two years ago.

Until now, students at Reedley High had to get up at 4:30 a.m. to catch a bus to Dinuba or Selma for practice.