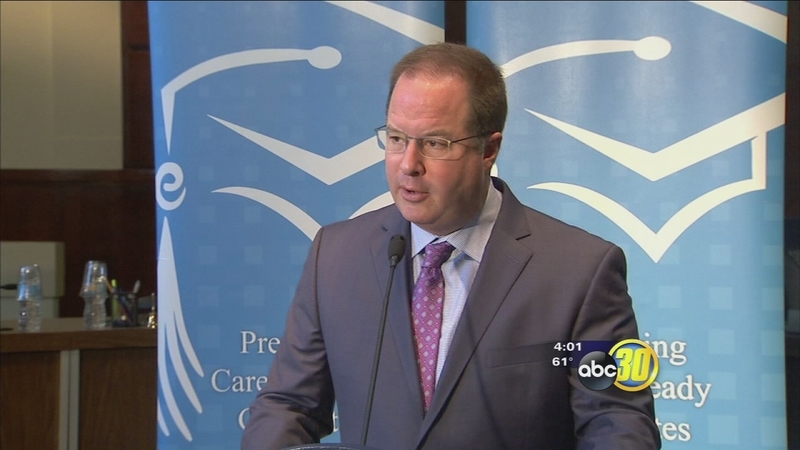 FRESNO, Calif. (KFSN) -- Michael Hanson told reporters Tuesday a lot has changed since he joined the district in 2005.

"I joked with the board at one point that's probably why I got hired as a 39-year-old with no superintendent experience, but it's turned out exceptionally well at the district for me and our community and our kids."

Hanson commended work over the last 12 years towards improving student success, plus the district's stable budget. He said he is at a turning point in his career where there is still some things he would like to achieve and feels Fresno Unified is in a good position to achieve its goals.

"Somebody should and can be able to pick up the baton and go from here and not be able to miss too many beats."

Hanson is the highest paid superintendent in the Sacramento and Central Valley region.

Hanson said his decision to leave has nothing to do with new board members coming in or an FBI investigation into illegal construction contracts that he says has gone nowhere.

"I'm not running from a damn thing, I'll tell you that. And I'm going to stand here and do this work and you will find me for the rest of that career wherever that is, I will be in the intersection of race and social class."

Those comments took offense to members of the Fresno Teachers Association who said they agree with Hanson's decision to leave the district.

"The audacity of him to talk about such an important issue when he's one of the highest paid folks in the state when almost 90-percent of our African American students are failing math," said Louis Jameson, Fresno Teachers Association.

Hanson said he plans to stay on several of the boards he sits on, including Valley Children's Hospital.

Hanson also did not say whether his wife, who also works for the district, will also leave next August.