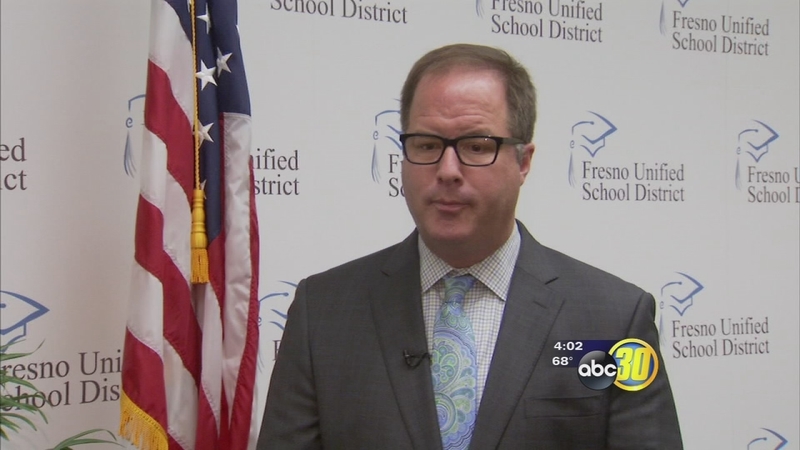 FRESNO, Calif. (KFSN) -- In a Survey USA Poll commissioned by Action News we are learning how some members of the public feel about the federal investigation into Fresno Unified Superintendent Michael Hanson. The investigation centers around questionable construction deals and the use of bond measure money.

The poll asked people who live in the school district boundaries about whether Hanson should take a leave of absence or be suspended during the investigation.

Fresno Unified is under federal investigation related to the construction of the district's newest middle school. The district built Rutherford B. Gaston Middle School under what's called a "leaseback" deal. With a "leaseback" cash-strapped school districts can avoid the competitive bid process and award a project to a construction company who in turn, fronts the money, and the district can slowly pay back what they owe.

In the case of Gaston Middle School, Harris Construction got the $37,000,000 project. In June, an appeals court said the deal was illegal.

"I can categorically say I've done nothing wrong and I'm very proud of the work we're doing here in Fresno Unified and, and I've said before I honorably, capably and legally carry out my duties every day and we get results for doing it," said Hanson.

The poll goes on to ask whether the superintendent of the Central Valley's largest school district should take a leave of absence. 70-percent answered "yes" with 26-percent saying no and 4-percent saying they were unsure.

When Action News showed Hanson the poll results he told us the results stem from a series of people who are trying to make him look bad. "My take on that is it's almost reality TV making it to ABC30, nobody knows the actual facts of the matter except the folks that are in the back room and I absolutely know what we've done and how we've done it."

The poll also asks people whether the school board here should take action. Trustee Chris De La Cerda responded to the poll by telling Action News,"I will continue to deal in factual matters. not on opinions not on assumptions not on emotions. That is my role as a board member"

Hanson is defending his actions. In three weeks, Hanson, along with the district's CFO and COO, are required to hand in subpoenaed paperwork to a federal grand jury.

Fresno Teacher's Association president Tish Rice, who, along with others, has been asking that Hanson step down during the investigation, says the poll justifies what they believe. "I think it does support our position given what's been occurring since may June that there's a lot of questions and you know everybody's waiting to see what the findings will be."

Regardless of the results, Hanson says he will not step down.