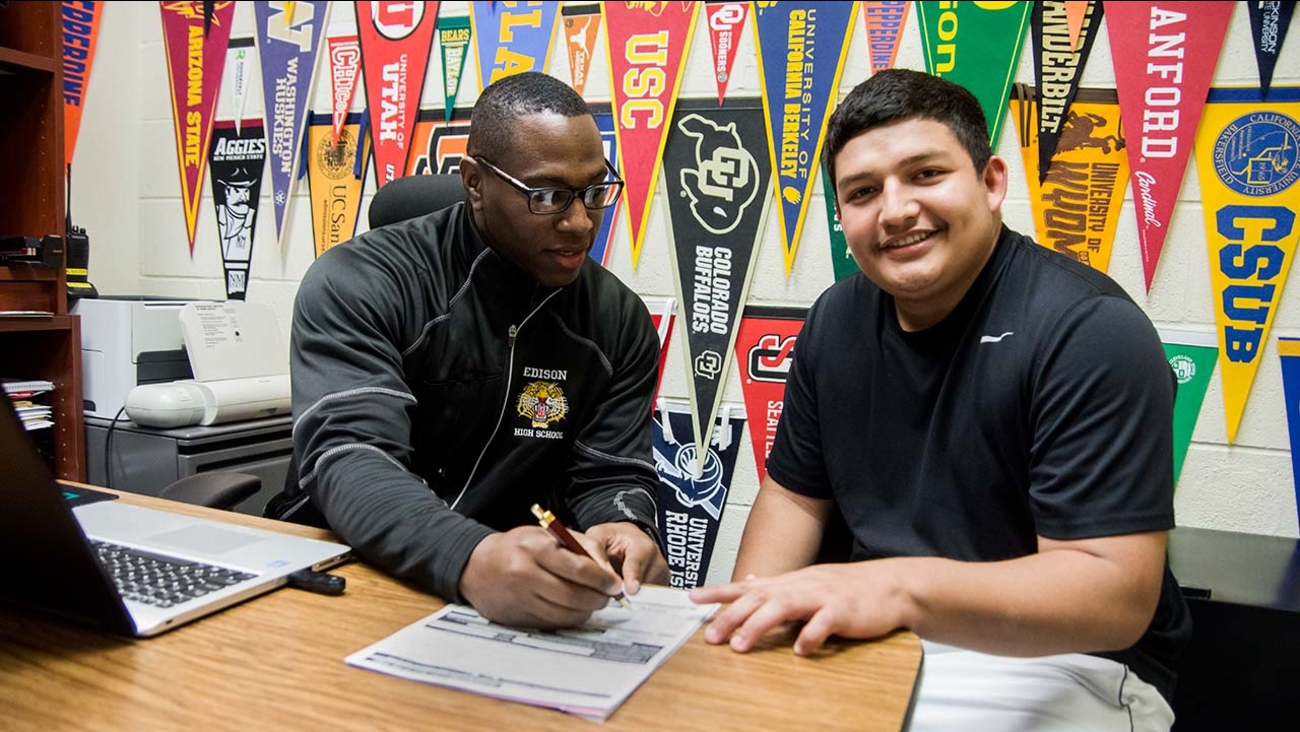 Oscar Rivera arrived at Edison High School in 2014 knowing only a few words of English and still recovering from his 1,000-mile trek -- on his own -- from his home in Honduras to Texas. His father was dead and his mother missing.

Despite obstacles that would have defeated many twice his age, the 17-year-old is on track to graduate June 6 from Edison. He arrived with zero credits but thanks to the guidance of counselors, took extra courses and worked hard so that he can graduate on time with his class.

"To have a kid who has gone through what he has, walked all that way, I think he can do anything he puts his mind to," said Arthur Sulcer, Oscar's academic counselor.

Oscar earned a 3.5 GPA last semester and is earning A's and B's this semester. He plans to attend Fresno City College as part of the Promise Scholars program for students in foster care.

"What he's been through is mind-blowing," said Jeff Belcher, a teacher on special assignment working with Project ACCESS, a program for students who are homeless or in foster care.
Oscar is one of 785 Fresno Unified students in foster care, 42 of those seniors.

Project ACCESS made sure Oscar was eligible for AB 167 and that all his credits were transferred to Edison High, and helped him apply for Fresno City College and complete his Free Application for Federal Student Aid (FAFSA) for college.

Oscar's story begins in his birth country of Honduras, where a farm laborer is lucky to make $5 a day. He attended six years of elementary school, then went to work in the corn and bean fields. His father was killed in 2009 while working in Florida and sending money home to the family. Six months later, his mother left for the United States to work and he and his five sisters lost contact with her.

"We think that she passed away," Oscar said.

A year later, he and his siblings had no money and at age 13 he decided to walk to the United States to find work and send money home. An uncle sent him $100 for the journey. He traveled by foot with a group of 20 as far as Guatemala, then traveled alone.

He carried only a school-sized backpack with food, some clothes, a small knife and a blanket. He slept along the way on the ground, hearing wild animals at night. It took him two months to reach Texas, arriving Dec. 16, 2013. The border patrol placed him in a camp for Honduran refugees. He was there for 29 days before a relative in Mendota paid his airfare to fly to Fresno. He was able to obtain paperwork allowing him to stay with the uncle.

He worked in the fields of Mendota for nine months, but immigration officials told him he would be deported unless he went to school. He attended Mendota High School for two weeks but his living arrangement with his relatives was no longer working out.

He was placed in the foster care system and went to live with his foster parent on September 3, 2014 and began attending Edison High. This move set him on a path to success.

"My foster mom helps me with everything in life," Oscar said.

At Edison High, he took English immersion classes to learn the language and worked hard to do well in school. He was motivated by a desire to help his sisters. He made friends and impressed his teachers.

"He said he wanted to have a better life for his family. He feels like America is the land of opportunity," Sulcer said. "Sending money to his family, that's his main goal right now."

This, his final semester at Edison, he takes seven classes (including three English courses), then three hours of physical science at night four days a week at Fresno Adult School so that he can graduate next month. He will be allowed to graduate with the state-mandated requirement of 130 credits.

He will get a part-time job this summer and hopes to travel to Honduras to visit his sisters after graduation. His sisters call every Sunday. His ultimate goal is to become a California Highway Patrol officer.