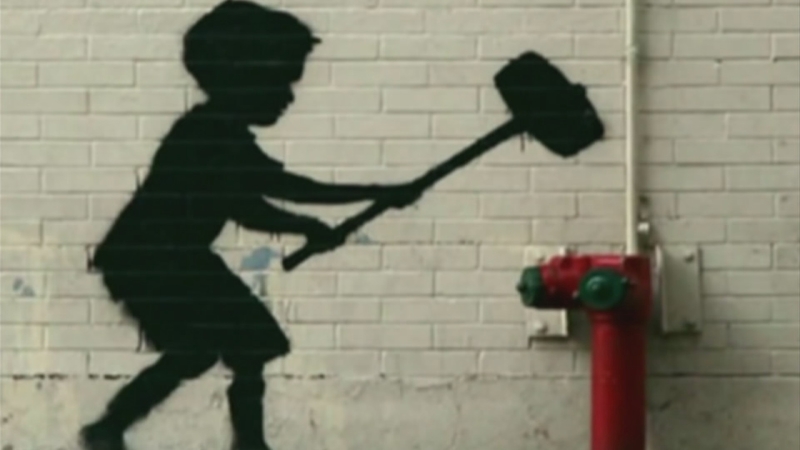 BEVERLY HILLS, Calif. -- How would you like to get your hands on some original works by elusive street artist Banksy? Some of his most significant murals and street art will be going to auction next Wednesday.

Banksy is back on the auction block. Julien's Auctions in Beverly Hills gave us an early look at its Street Art exhibit.

Works from Shepard Fairey and Space Invader will be up for sale starting next Wednesday, but it's the pieces from Banksy that are drawing the most attention. His stencil art graffiti - done in stealth mode - often just pops up overnight on buildings and walls around the world.

"Twenty years from now these pieces he's done in the street, people are going to look back and identify this as the start of a whole new movement," said Michael Doyle with Julien's Auctions.

And as that street art movement gains notoriety, Banksy doesn't. The British-born artist is an enigma, known worldwide for not being known.

"People have dedicated years of their lives trying to track down who Banksy is, but honestly, nobody has been able to definitively say who he is," said Doyle.

However, one 7-by-7-foot, 3,000-pound Banksy piece may be pushing the limits of that mystery. You don't have to be a CSI sleuth to spot the new clues.

"On the paint bucket on the image, he used three fingers to smear red paint. On those three fingers, you can clearly see fingerprints," said Doyle. "So it's kind of playing with his audience saying, 'Can you figure out who I am?"

It shouldn't be too hard. Just look for an artist with a lot of money. The piece with Banksy's prints is pegged to sell at a price between $200,000 and $400,000, and that's considered conservative.