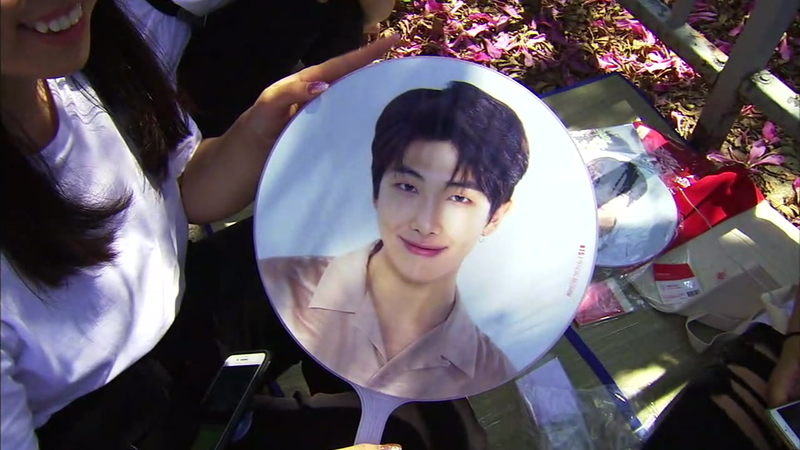 LOS ANGELES -- It's a big week for pop music fans in Southern California. The members of the international sensation known as BTS bring their special sound and extra-special dance moves to the Staples Center in downtown L.A.

For four sold out nights. BTS just topped the Billboard charts once again, this time for their album, "Love Yourself: Answer."

The seven-member singing group, which hails from South Korea, have developed a loyal, devoted legion of fans, who have dubbed themselves "Army." And the BTS militia was out in full force for opening night. "Army" members feel the group's songs have something important to say.

LISTEN: Hear more from some of BTS's biggest fans in SoCal on George's podcast, "Off the Red Carpet"

"It's helped my self-esteem, it's helped my depression," said Ashley Bonner. "Honestly, it's been like a blessing these past two years because of BTS."

"They've always been pushing to voice all the problems that the youth are facing every day," said Kori Gutierrez. "And right now they're expressing the issues of being yourself, and love, and putting yourself first."

And while "BTS" sings in Korean, the "Army" says when it comes to music, there are no language barriers.

"There's plenty of lyric translations, there's hundreds of fans that interpret them in different ways, so you can get a really complete understanding of the song," said Emily Sachs, who traveled from Florida to see the show.

Following its run in Los Angeles, the "Love Yourself" tour heads to Oakland, Fort Worth, Newark and Chicago.

Did you like this story? You'll love George's podcast, "Off the Red Carpet"!