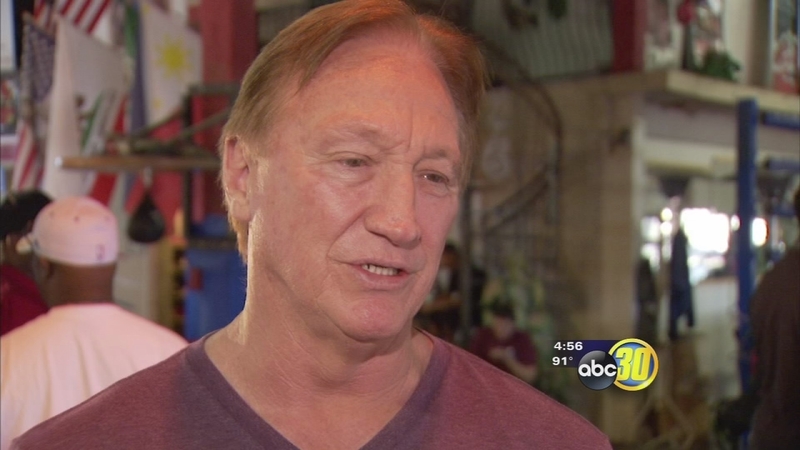 FRESNO, Calif. (KFSN) -- Former Fresno mayor Alan Autry has returned to his Hollywood roots. Autry has been shooting a movie locally with some fan favorites.

Velarde's boxing gym in Central Fresno was transformed into a set for Autry's movie "Victory By Submission." Autry was back in his element - directing and acting in a Hollywood project.

Autry said, "To bring film-making to the Central Valley, particularly the Fresno area, has been a dream of mine for a long, long time."

Action hero Fred "The Hammer" Williamson was also in Fresno to shoot some scenes though the Fresno heat was a bit much.

Williamson said, "This water you're seeing on my face is from the weather in Fresno."

Williamson was still fit and trim at 77. "The Hammer" has remained a big star in Europe. He first met Autry in 1972.

"I'm always looking back and trying to help a guy by being in his film or helping get a distributor and also help him the raise the money to get the kind of film he wants," said Williamson.

The movie is about an MMA fighter who has his priorities mixed up.

Autry explained, "It's a story of pain and brokenness but ultimately it's the story of triumph over those through faith."

Lee Majors will also appear in the movie. The "six-million dollar man" just completed shooting his scenes in Fresno.

Autry said, "They also agreed to do it for a great reduction of what they usually take and hopefully it's because they believe in the project."

Williamson has always approached every movie with three rules. "You can't kill me. I have to win my fights and I get the girl at the end of the movie if I want. That's in my contract."

Autry said he's hired 30 locals to shoot the movie on a half-a-million dollar budget. He added the faith-based movie will still be entertaining with plenty of fighting.