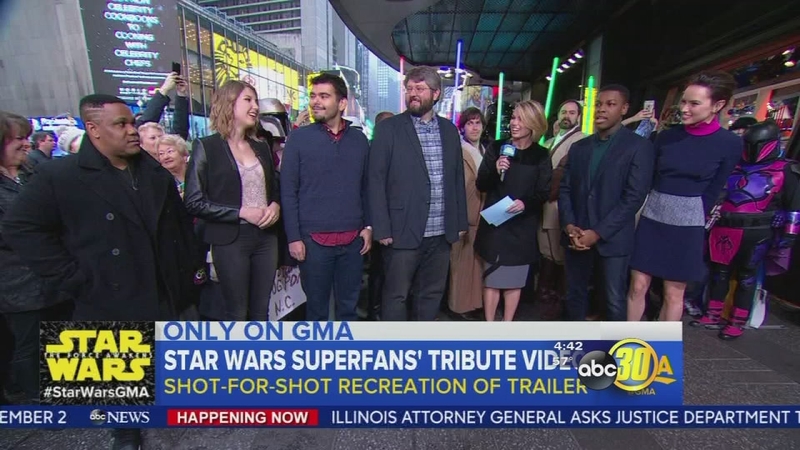 FRESNO, Calif. (KFSN) -- Star wars fans around the world are eagerly anticipating the upcoming film The Force Awakens. And that includes a group from the Valley who recently paid tribute to the movie by recreating the sequel's latest trailer frame- by- frame in what's called a "Swede."

Since its release on November 18th the Swede has exploded on the internet and gained national attention. It even caught the eye of producers at ABC's Good Morning America.

The two Fresno men behind the short film, Bryan Harley and Roque Rodriguez, say they were speechless when they got a call from the morning show. "At first it was just an email if they could use a clip on the show and we said, 'yes of course' then a few hours later they asked about doing a Skype interview and, oh that would also be great, then a couple hours later they asked what if we fly you to New York," said Harley.

So Harley and Rodriguez, along with two of the Swede's castmembers, packed their lightsabers for the big apple and a Wednesday appearance on Good Morning America where they even got to meet some of the stars of The Force Awakens. "They kind of surprised us by bringing out stars of the new Star Wars movie it was really unexpected to meet them. It was just amazing," said Harley.

For the better part of three weeks the local filmmakers used every free second they had-- after work and on weekends-- building and filming everything you see in the trailer "From the moment the movie trailer dropped on Monday Night Football we saw the trailer and went and bought tickets to see the movie and then we started working on the trailer that very night," said Rodriguez.

This isn't the first time one of their Swedes has gone viral, the pair gained a national cult following for their Avengers and Pacific Rim videos on their Dumb Drum YouTube channel-- they are also behind Swede Fest, a local film festival in Fresno's tower district, work proving the force is strong with these two filmmakers.