Mr. Penguin in town to celebrate the holidays 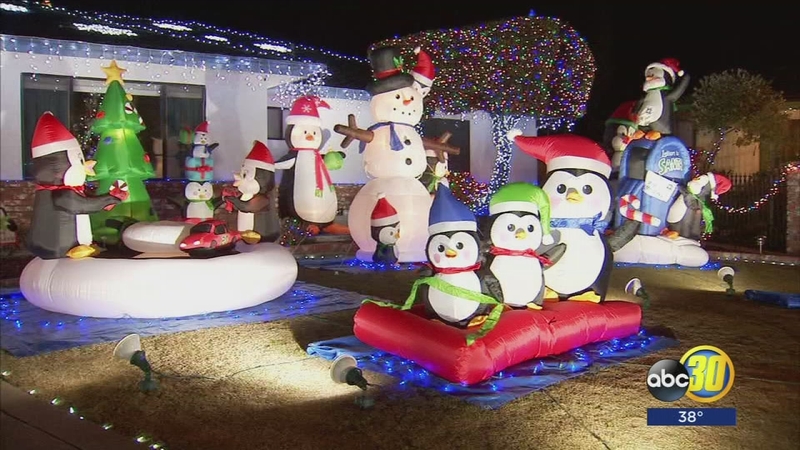 Mr. Penguin in town to celebrate the holidays

FRESNO, Calif. (KFSN) -- It may be Christmas time at Timberline Court, but this line is not for Santa Claus. Instead, it is lights, camera, penguin?

Nobody knows how many are in the village just that they collectively wobble and squabble from the South Pole to Hanford every year.

Bob Stewart and the neighbors lend the birds their yards.

"He starts about three weeks before the season, and it's a full-time job almost all day he's out here getting things ready, he's a perfectionist," said Stewart.

Mr. Penguin's colony presents all sorts of questions. What is a seven-foot-tall flightless bird doing in the Valley?

"I think he said to take a picture, so smile," said Michael.

His mom says she never thought this unlikely attraction would become a family tradition.

The neighbors say they don't mind the holiday traffic at all.

"He's very cheerful, he loves kids, and this is what he lives for, to do this, it really does," said Stewart.

Despite his warm spirit, much of Mr. Penguin remains a mystery, including just what exactly he is saying.

"It's penguinese, that's all we know."

Whatever the words that come out of his beak, it is enough to draw all who pass through the neighborhood in for a smile.
Report a correction or typo
Related topics:
arts & entertainmentfresno countyholiday
Copyright © 2021 KFSN-TV. All Rights Reserved.
HOLIDAY
It's Flag Day! Here's how to display your flag
Christmas in the Park is a holiday wonderland in the Bay Area
Walmart to close US stores on Thanksgiving again
Gas prices are at a 7-year high, just in time for Memorial Day
TOP STORIES
Tulare man meets daughter for first time after 53 years
LIVE: Cal/OSHA to issue new worksite pandemic rules
Grass fire burning south of Prather in Fresno County
Tracker shows how close we are to overloading power grid
Supreme Court upholds Obamacare for 3rd time
FUSD trustees vote to keep police officers on campus
'Deck Fire' burning in Auberry, mandatory evacuations lifted
Show More
Biden to sign bill to make Juneteenth a federal holiday
Man declines COVID-19 vaccine, needs double lung transplant
CA power grid declares Flex Alert for Thursday
Western US experiencing worst drought in region in 20 years
City of Fresno working to help residents struggling to pay rent
More TOP STORIES News