Paul McCartney kicks off his One on One tour in Fresno

KFSN
By Vanessa Vasconcelos
FRESNO, Calif. (KFSN) -- He may sing "Yesterday," but tonight music legend Paul McCartney will take the stage in front of a sold out crowd in Fresno's Save Mart Center.

It's a concert years in the making. For the first time, 21 time Grammy Award winner and former Beatle Paul McCartney is headed to Fresno. The two time Rock and Roll Hall of Fame inductee has made the Save Mart Center his first of 11 North American dates, and the only California performance.

Save Mart Center officials say McCartney's production crew has been setting up the stage since 8 a.m. on Sunday morning.

"It's a great a great looking stage. It's got everything. Huge video screen, there will be a lot of pyrotechnics during the show. You know he's kinda known for his pyro," said Sean McElhinney, Assistant General Manager at the Save Mart Center."It's enormous. That's all I'll say. Definitely one of the biggest productions we've done in here -- they're pulling out no stops."

He may sing "Yesterday," but tonight music legend Paul McCartney will take the stage in front of a sold out crowd in Fresno's Save Mart Center.

Once the stage was complete, the box office was able to release a couple hundred extra tickets. And not just any tickets -- some in the front row. Fans braved the early morning hours on Tuesday to get their final shot at seeing the music legend.

McCartney takes the stage tonight at 8 p.m., doors are at 6:30. A traffic advisory has already been released so you'll definitely want to avoid the area if you're not going -- or give yourself plenty of extra time if you are.
Related topics:
arts & entertainmentfresno northeastfresno stateconcertpaul mccartneymusic
Copyright © 2021 KFSN-TV. All Rights Reserved.
PAUL MCCARTNEY
Paul McCartney adapting 'It's a Wonderful Life' in his first stage musical 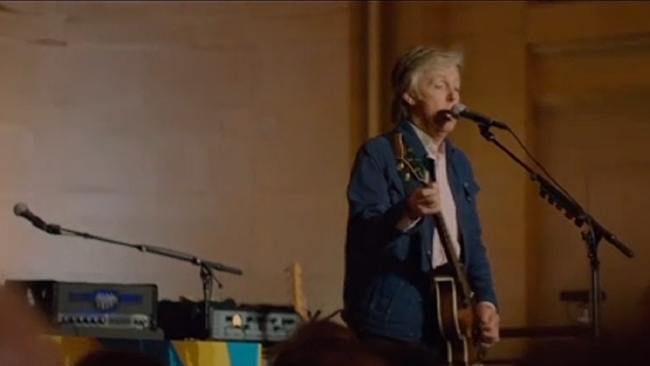