'Walking with Dinosaurs' to stomp through Fresno 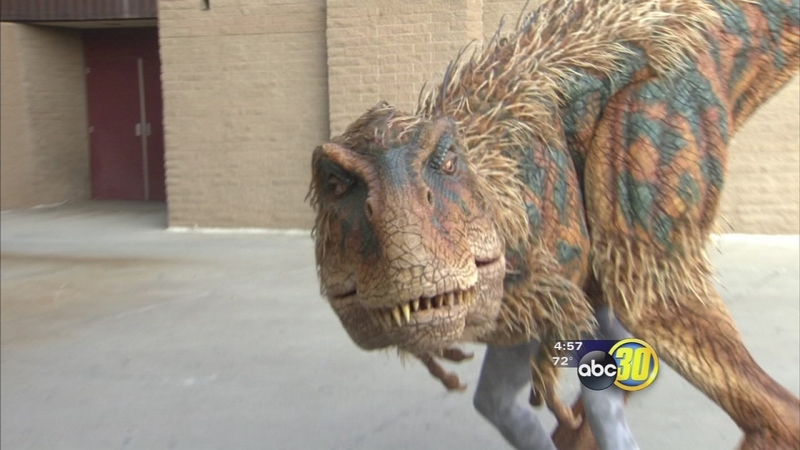 'Walking with Dinosaurs' to stomp through Fresno

FRESNO, Calif. (KFSN) -- Life-size dinosaurs will soon be taking over Fresno. The popular show "Walking with Dinosaurs" is making a return to the Valley.

It's not every day you get up close and personal to a Tyrannosaurus rex, but Action News got a chance to see this extinct dino in action as it gets ready for the "Walking with Dinosaurs" show.

"We have 20 life-size dinosaurs in our show and they range from little baby Plateosaurus all the way up to a 36-foot Brachiosaurus, which is about the height of a three-story building," said Terey Summers, a spokesperson for "Walking with Dinosaurs."

The dinos will rule the Selland Arena starting December 3. The show is coming back to Fresno after a six-year break. In its time, millions of people all over the world have been captivated by the history, entertainment and a chance to go 65 million years back in time.

"We are getting to see the next best thing to a real dinosaur. These are scientifically accurate dinosaurs," said Summers. "And it's a beautiful story told by the character of a paleontologist and it takes us through the Triassic, Jurassic and Cretaceous periods."

Organizers say behind every dino is one or more suit performers, who help bring the creatures and their personalities to life.

"You really do have to be an athlete because this suit is about 100 pounds but it's distributed over 14 feet. So you just have to have tremendous core strength and also pretty much know how to move as a dinosaur," said Summers.

This Thursday's Art Hop will also get a little interesting when the Fulton Mall goes to the dinos. You can catch a sneak peek of "Walking with Dinosaurs" Thursday night. Baby T-Rex will make an appearance under the Clock Tower starting at 5:30 p.m. and make its way down the Fulton Mall.