EXCLUSIVE: Victim grazed by bullet during Highway 99 shooting speaks out 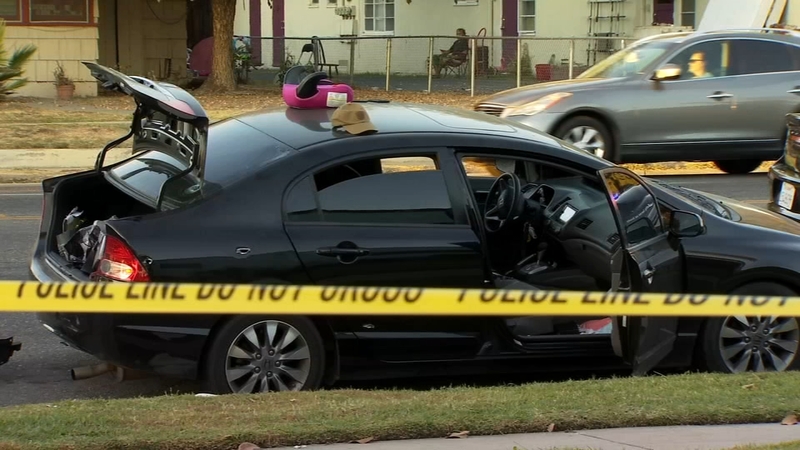 EXCLUSIVE: Victim grazed by bullet during Highway 99 shooting speaks out

FRESNO, Calif. (KFSN) -- A blooded bandage wrapped the head of a young Fresno man who narrowly escaped death Friday afternoon while riding in the passenger seat of a Honda Civic. The car peppered with bullets holes from a crossfire shooting along Highway 99 near Belmont.

"I was screaming; the driver was crying. I was trying to make sure we didn't crash. I tried to grab the wheel," the man said. He wished to remain nameless.

During that frightening attempt to get away, one of the bullets pierced through the windshield, grazing his head.

Inside the car were three other adults. The victim says one of them is nearly five months pregnant and was sitting next to her two-year-old little boy.

Mary Garcia saw that toddler crying and having a complete breakdown when the driver stopped in front of her home at Clinton and Warren Avenues.

HIGHWAY SHOOTING... CHP says someone was shot along Hwy 99 near Belmont. According to officials, shooters in 2 vehicles were firing at each other. One of the victims drove to Clinton and Warren where officers are now investigating. CHP says victim was grazed in the head @ABC30 pic.twitter.com/NkatnZMyjk

NEW: CHP confirms man w/ bandage is shooting victim. He was in car with 3 other pol, including toddler (boy) when he was grazed. Officers says ppl in both cars were shooting at each other. This all started near @CheckersRallys by Fresno St. That’s where fight took place @ABC30 https://t.co/FiH6BP2byl

"Really shaken up, I mean, who blames him, you know. I guess he was nervous and upset all the commotion going on," Garcia said.

The California Highway Patrol is investigating the dangerous highway gunfight. Sgt. David Salcido tells Action News it involved two rival gangs who were firing at each other.

"It's just a miracle that no one got caught in crossfire it's almost unbelievable that other stray rounds didn't strike another vehicle," Salcido said.

While the man who was struck said he has no idea why it happened, "I am not a gang banger," he said.

He also has a message for the person who pulled the trigger.