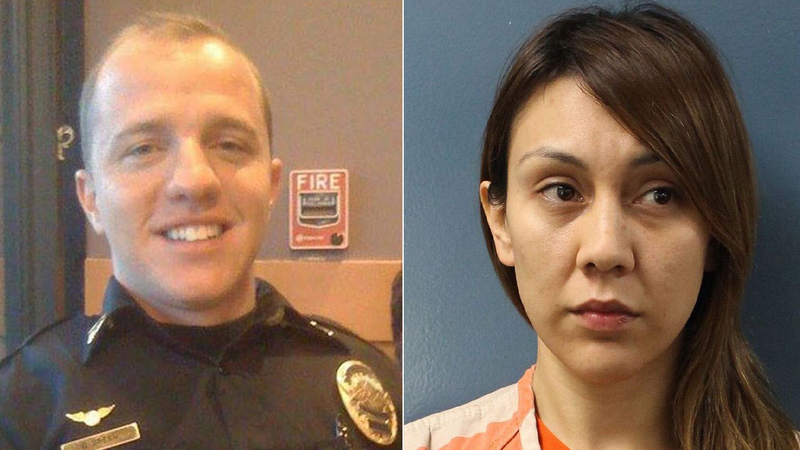 EXETER, Calif. (KFSN) -- Action News has obtained court documents showing the nasty custody battle for a toddler shared by a murdered Exeter police officer and his ex-wife. She is now the only suspect in his killing.

Daniel Green, 31, was found dead on Friday in his Goshen home. His ex-wife Erika Sandoval, 28, was arrested on Saturday.

If the Tulare County district attorney doesn't file charges against Sandoval, she has to be released by noon Tuesday. Right now they're waiting for evidence from the Tulare County Sheriff's Office before they decide if she should be charged.

Flags fly at half-staff in the town of Exeter where Green served as a police officer for 10 years. Green was found dead in his home Friday by fellow officers after he didn't show up for work.

"The community of course is in shock, and we are just keeping the family of Officer Green and his fellow officers, we're just keeping them in our thoughts and prayers," Chamber of Commerce Executive Director Sandy Blankenship said.

Sandoval is the main suspect in his death and the mother to his 2-year-old child. According to divorce papers, they had their son after their divorce in 2012.

In court documents, Green described his ex-wife as an unpredictable person with extreme anger issues. In those same papers, Green accuses his former wife of stealing a gun, which went missing from his home during a heated argument. But Sandoval denied those claims, and in a text message she sent to Green she says he was the abusive one and even choked her in the past.

Sandoval called Green a master manipulator who used his position of authority to intimidate her. And a text message sent from Green to Sandoval says, "You don't threaten me at all. When I want I have all it takes to put you in prison."

But amid the scandal, at the Exeter Police Department a small memorial is forming in remembrance of their brother in blue. The police chief acknowledged the small department is grieving and seeking support.

"We don't know what kind of arrangements are being made at this time, so really we're going to support their fellow officers; that's basically what we can do right now," said Blankenship.

We are expecting a press conference Tuesday at 11 a.m. with the district attorney's office, where we've been told that if charges are filed we will get a full explanation of their decision.