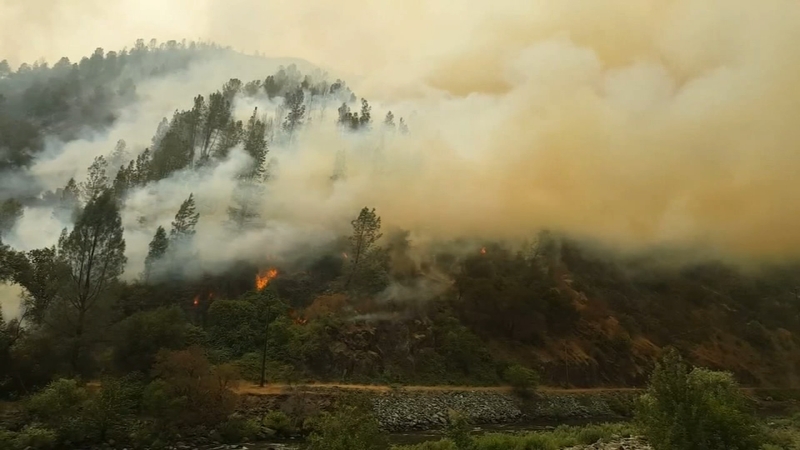 AHWAHNEE, Calif. (KFSN) -- A thick layer of smoke and haze is forcing firefighters to work on the ground and not in the air at the Ferguson Fire in Mariposa County.

On the ground, firefighters are dealing with smoky conditions, low humidity levels, and 90-degree temperatures.

"We do things like staying hydrated, take breaks, keep an eye on each other, and we have medical personnel here in place should we need it," said Joe Amador, CAL FIRE Public Information Officer.

Amador pointed out keeping firefighters safe is a challenge with changing weather patterns that could force the fire to move in a different direction at any moment.

"One of the biggest dangers for firefighters is not knowing fire conditions. So we have people in place specifically just to monitor that, spread the word should a change in the weather conditions come about," said Amador.

Early Wednesday morning winds from the north pushed flames from the Ferguson Fire to the south. While the change in direction was a benefit to Yosemite National Park, it put Lush Meadows and Ponderosa Basin North of Triangle Road in danger.

Those communities were put under new evacuation orders Wednesday morning, and the Red Cross had a new evacuation center in Oakhurst open in just a few hours.

"A lot of these folks are in an area where there's only one way in and one way out, and if the fire takes over and blocks that exit then they're trapped, and we don't want to see that," said Simon Elman, Red Cross.

Nancy Gunderson of Ponderosa Basin was one of the first evacuees to check in. She was forced to evacuate from another wildfire nearly five years ago.

That familiarity and a text message from the Mariposa County Sheriff's Department had Gunderson, and her husband pack up their RV and other personal items Wednesday morning.