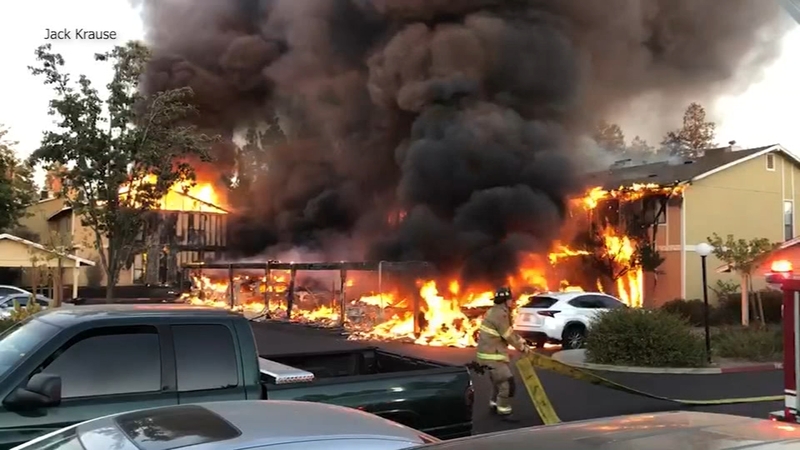 ABC30 Insiders caught plumes of black smoke and flames spreading through the Maplewood apartment complex as it took more than 50 firefighters to get the blaze under control.

Witnesses said it could be seen from miles away.

"We've been able to determine the fire originated in a dumpster," said deputy chief Rich Cabral.

It was a dumpster that sat under a wooden carport structure.

According to investigators, the flames destroyed several vehicles and quickly spread to two adjacent apartment buildings causing $2.5 million in damages.

Video sent in by an ABC30 insider show neighbors reacting to the tall flames engulfing an apartment building. (Plesy Chan)

"There were 14 units total that were affected by this fire, and eight units are a total loss," Cabral said.

Felicia Valdez had just moved into one of those apartments three weeks prior but was not home at the time of the fire.

She returned Monday to find all of her belongings destroyed.

"I'm like numb...everything we had is gone. I have four kids, and they lost everything. I'm still shaking," Valdez said.

No one was injured, but the Red Cross says about 15 people are now without a home following the fire, some of the displaced are Fresno State students.

"We're so happy to hear everyone was safe and able to evacuate as soon as possible. But what does that next step look like and sometimes it's the mental health component," said Red Cross representative Nicole Maul. "We have volunteers who are trained in mental health care as well as spiritual care."

Fresno State says the university is prepared to assist any students affected by this fire and help them get through this difficult situation.

We are aware of the apartment fire burning near Fresno State. The campus is not affected at this time. If any students are impacted by the fire, we stand ready to support them.

Students displaced from the fire may call Fresno State Police Dispatch for assistance: 559.278.8400.