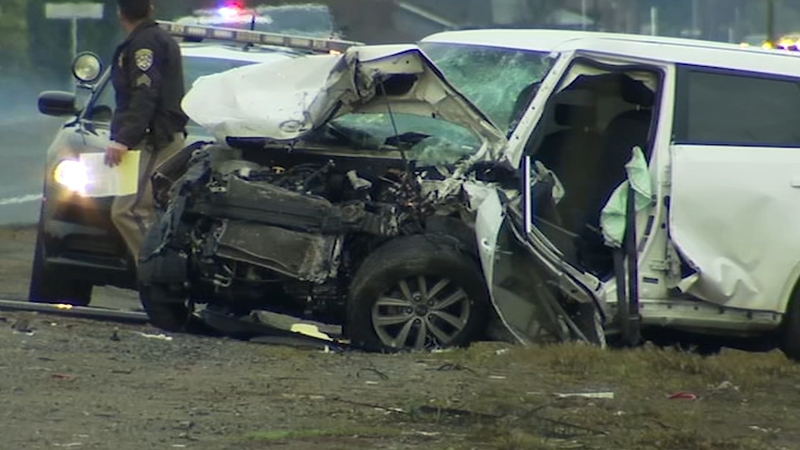 VISALIA, Calif. (KFSN) -- A woman is dead and three people are in the hospital recovering after a head-on crash in Tulare County.

The collision happened early this morning southeast of Dinuba.

The front end of a Kia Soul is crushed and the wheels bent in.

Just across the road, a Chevy Astro van is flipped on its side and almost unrecognizable, four people were inside the vehicle.

"Occupants inside the Astro van were screaming and yelling for help. they were pinned in," said Visalia CHP Sergeant Ryan Pedersen.

First responders had to use the Jaws of Life to rescue them.

Pedersen says a 59-year-old woman sitting in the back seat was killed in the impact.

The other three adults inside suffered major injuries and were sent to the hospital, one of them had to be airlifted.

Pederson says the crash off Avenue 384 Southeast of Dinuba was caused by the other driver, 33-year-old Gabriel Johnson of Oakland.

For some reason, Johnson drifted into the eastbound lane crashing into the Astro van.

Detectives found what could be methamphetamine in his car, the controlled substance is still being tested.

They're also still trying to determine if he was high.