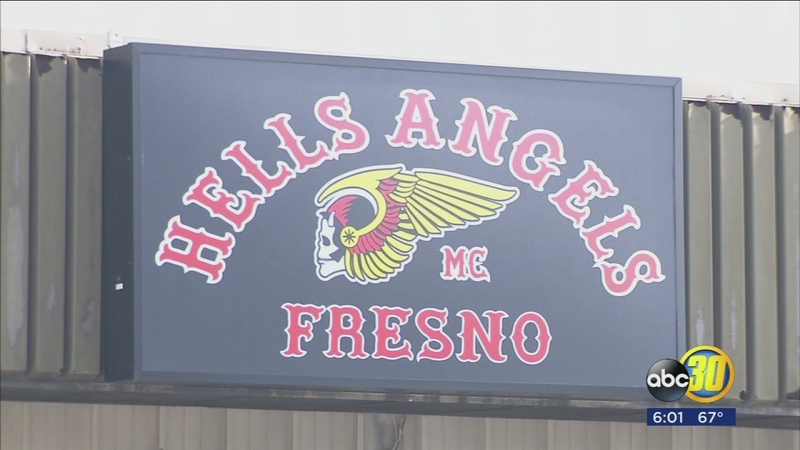 FRESNO, Calif. (KFSN) -- The crimes are everything from homicide, to extortion, intimidating witnesses and robbery. Monday several top leaders of the hells angels organization in California are under arrest. The leader of the local chapter- accused of playing a big part in a murder.

40-year-old Brian Wendt is accused of taking part in a criminal organization and setting up a homicide that happened inside the Fresno Clubhouse.

Bullet holes in the side of the building were part of the focus of the investigation Monday by federal agents.

That investigation included searches in Santa Rosa and parts of Sonoma County ended in the collection of valuable evidence.

Federal agents Monday morning, along with Alcohol Tobacco and Firearms Agents picked through the Fresno Club location near Golden State and Church.

According to authorities, it revealed Wendt, aided and abetted by two others killed someone at the local building. A search was also conducted at the Fresno Pet Cemetery but agents would not comment on how that ties into the investigation. Fresno police confirm they never investigated a murder at the Hells Angels Fresno location in 2014.

"From reading the indictment it doesn't appear there was a wiretap going on, although there usually is. But in this one, it is so particular as to the kinds of guns that were being used and the manner and means but it appears there were at least one or more informants on the inside," said Capozzi.

The 17-page federal document alleges the Hells Angels Sonoma County Chapter has close ties to the Fresno and Boston chapters. Nine people were arrested in all, a majority in Santa Rosa.

Capozzi says the indictment alleges so many wide-ranging crimes, it appears to be intended to take down the well-known motorcycle club.

"What they're trying to do is get the leaders of each one of the organizations, the San Francisco and Fresno, and try to put them away behind bars and hoping that this will wipe out the entire organization."
Report a correction or typo
Related topics:
fresnofresnomotorcycleswarrant arrests
Copyright © 2021 KFSN-TV. All Rights Reserved.
FRESNO
Police investigating deadly shooting in southeast Fresno
Woman hit and killed on Highway 99 in Fresno area
Fresno's Boy Scouts go to camp
Firefighter injured, several people displaced in NW Fresno
TOP STORIES
COVID cases on the rise across the Central Valley
Fresno to require unvaccinated employees to test for COVID weekly
1 killed after car crashes into auto dealership in Fresno Co.
18-year-old arrested for deadly shooting at party in Reedley
Ex-Fresno police officer with links to Proud Boys sues City of Fresno
Murder defense: Suspect was pepper-sprayed first
Driver charged in Fresno hit-and-run crash that killed 10-year-old
Show More
3-year-old attacked by dog, hospitalized in Tulare County
Local districts discuss curriculum plans for upcoming school year
Housing Watch: Buying a new house while selling
Amazon driver tracks down California man's stolen truck
'Ample chance' of new COVID variant worse than delta, Fauci warns
More TOP STORIES News