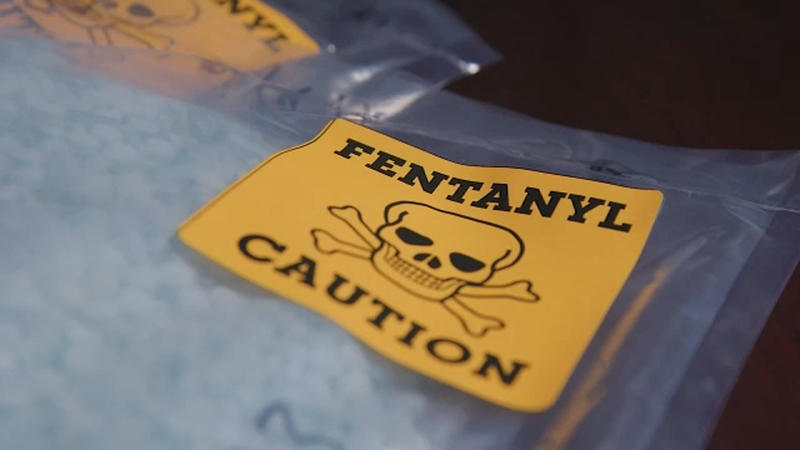 FRESNO, Calif. (KFSN) -- On the first-ever National Fentanyl Awareness Day, families across the country are shining a light on the narcotic that has now become the leading cause of death among Americans 18 to 45 years old.

"I did not know what fentanyl was until I lost my son," said Elaine Hudson.

But now, the Fresno mother is making it her mission to make sure that other parents do know about the deadly drug, so they don't have to walk into their child's room and discover what she did.

"No parent should have to find their child like that," she said.

On April 17, 2020, Elaine found her 20-year-old son Frankie dead. The medical examination revealed he had 6 times the lethal dose of fentanyl in his system.

"I could tell he had been dead for a long time," said Elaine. "He still had his headphones on."

Officers found remnants of the cut-up pill that killed Frankie inside his room. Days later, his mom says she found the rest of the stash that Frankie had believed to be Xanax.

"Every day is fentanyl awareness day here," said Flint Andersen, founder of Parents and Addicts in Need, or PAIN.

He says many deadly overdoses can be traced back to marijuana, cocaine, Xanax or other pills that are taken without the user knowing they are laced in fentanyl.

"Today, experimentation is going to kill you," he said.

On the first-ever National Fentanyl Awareness Day, the organization Families against Fentanyl is drawing attention to the rapid rise of fentanyl-related deaths.

The organization is sending a three-page letter to the Biden Administration to call on real-time data to be published, including fentanyl poisoning deaths, suspected fentanyl poisonings and instances in which medication like Narcan is used to reverse overdoses.

The group wants to see a collection of data similar to the way COVID cases are tracked.

"Kids think that it's not going to happen to them," said Elaine. "I am sure Frankie thought that."

She knew her son had used marijuana and drank alcohol, but didn't know he was using pills.

"I had no inkling whatsoever that he was using anything," said Elaine.

She says she has thought about what she could have done differently countless times, and now wants other parents to hear it.

"I wish I could have known so I could have said to Frankie, 'Look, Frankie, this is out there. Be careful whatever you do because this could be something that you ingest and you may not wake up.'" said Elaine.