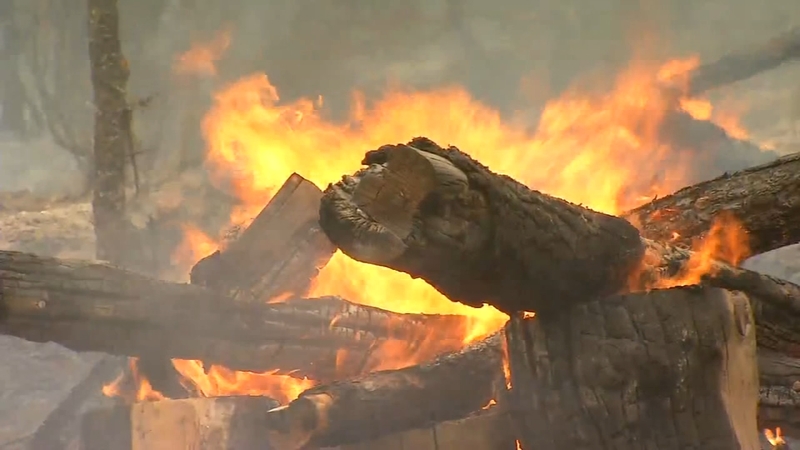 MARIPOSA COUNTY (KFSN) -- We are now entering week three of the Ferguson Fire and containment is down to just 35-percent after exploding in size overnight.

The fire has burned 81,699 acres prompting mass evacuations and poor air quality. Unpredictable weather and fire behavior has caused a majority of Yosemite is be closed through Sunday.

Two more firefighters were injured from overnight. Conditions are not only proving dangerous for those on the front lines, they are prompting new evacuations which is causing stop and go traffic along the 41 for evacuees.

Dakota Snider, a Yosemite Valley Resident, said, "The backburning they've been doing up to the side of the road, they have pink slurry on one side and fire burning on the right-- your goal is to keep cruising."

Snider and fellow evacuees are staying with friends until it's safe to drive back to their homes. He said most of them had their bags packed when pre-evacuations were issued last week.

"The smoke over the last month has been intense. We've had fires before, we've had evacuations before, but to have this extended period of inversion layer of hazardous un-breathable air it takes its toll."

Tenaya Lodge is typically sold out with tourists this time of year, though they're just at 50-percent occupancy, Assistant General Manager Brett Archer said now they can do their part to help the community.

"We're honored to be housing some of the firefighters and locals from surrounding areas."

As thick smoke towers over the area, close to 3,000 firefighters are working to strengthen containment.

Though acreage grew by more than 3,500, overnight crews were successful in keeping flames away from evacuated communities like Foresta and Yosemite West.