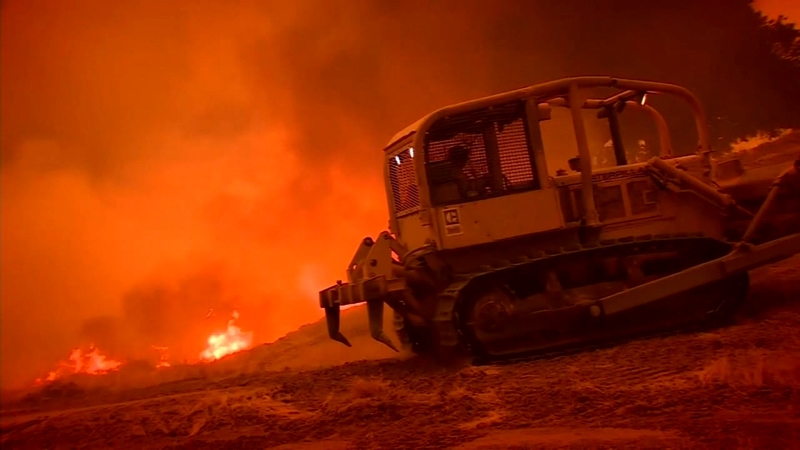 FRESNO, Calif. (KFSN) -- As California's wildfire season ramps up statewide, it's not only firefighters getting called to the front lines.

While aerial and engine attacks are vital to fire suppression efforts, it's the bulldozers creating that fighting chance.

CAL FIRE Public Information Officer Michael Whitaker says, "They get into a lot of these steep, inaccessible areas for us that we wouldn't necessarily be able to get to on foot."

He says they do everything from creating new roads for fire engines, to gain access, to cutting safety zones, should firefighters not be able to get back to their point of origin.

Whitaker adds, "By utilizing the dozers they definitely can stop the fire in its tracks if they're going direct."

Direct bulldozer lines are constructed by something called blading the ground, which means they remove the fuel, or flammable material down to the bare soil.

Dozer operator and transport driver John Bradley was contracted to the Ferguson fire by the Forest Service. He says, "You take and shove the brush, grass, trees whatever away from the fireline."

Not all are directly up against the fire lines. Some are contingency lines to protect nearby communities.

Bradley says he's created lines that, "Are over 100 yards wide and miles long. But then I've also done lines that are a dozer blade or 10 feet wide."

According to the CAL FIRE website, dozers can cut anywhere from one to eight miles per hour, but typically do one to three depending on terrain.

Though enclosed cabs and lighting protects operators, there are serious risks that come with the job.

CAL FIRE heavy equipment operator Braden Varney was killed in a dozer rollover Saturday. Authorities say he was working on a ridge creating a fire break to protect the Jerseydale community.

Two weeks prior, in Coarsegold, a veteran dozer operator overturned while fighting a grass fire on a steep hill along highway 41. He survived.