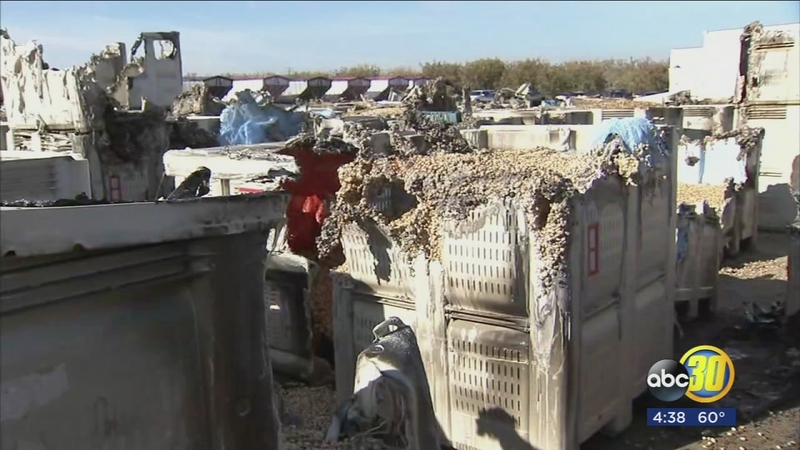 TERRA BELLA, Calif. (KFSN) -- Pistachios and plastic melted together may seem like some kind of strange art, but it is actually the destruction left behind by a fire at Aro Pistachio in Terra Bella.

It happened Monday morning at 3 am.

Captain Joanne Bear of the Tulare County Fire Department said, "They took all necessary precautions to prevent this, but the water was able to get in there and cause a chemical reaction with the fumigant."

A fire broke out immediately igniting 280 tons of pistachios that were ready for shipment. Adam Orandi CEO of Aro Pistachio says he could not believe his eyes.

"It went up so fast, it's like something you see in the movies, it was two-three minutes from the time we saw the ignition source. It was like a Roman Candle," said Orandi.

Orandi says the fire burned for at least a day and when it was finally out, 1.7-million dollars worth of damage was left behind.

"It's unfortunate not just for my family, but for the families that this company supports and we have about 100 families that count on us."

According to Tulare County Fire, the damage could have been more devastating.

"It could have been much worse had the fire spread to their other equipment and their packing facility," Captain Bear said.

Orandi says this time of the year is one of the busiest for his company. He had customers lined up waiting for deliveries that can no longer be fulfilled.

Orandi said, "We are right at the deadline for Chinese New Year, that is a big customer for us and in general. There are some disappointed customers, I had to make some tough phone calls."

Orandi says all he can do now is move forward.

"We have terrific employees and everybody has pitched in to try and limit our losses and we will move on."