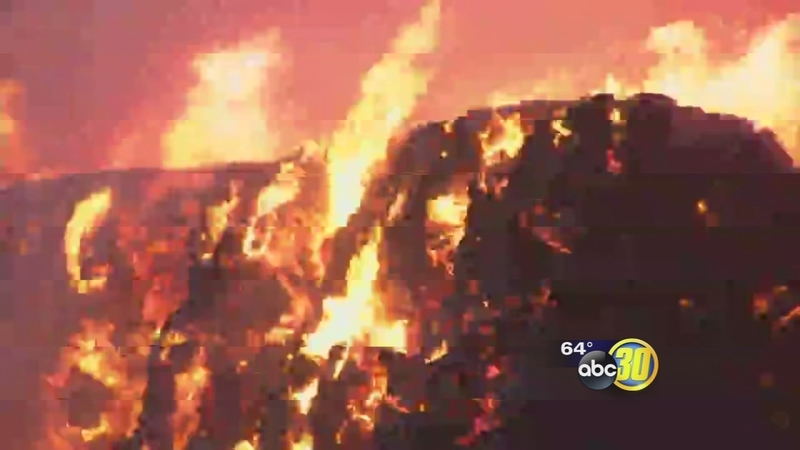 FRESNO, Calif. (KFSN) -- A fire in Merced County will burn for several more days after 800 tons of hay went up in flames Wednesday afternoon.

Smoke billowed thick into the air as flames threatened to devour a dairy farmers life line. 800 tons of hay and 200 tons of silage all used to feed cattle lost in a matter of hours.

Cal Fire Battalion Chief Jeremy Rahn said, "Our understanding is that there was mechanical machinery working in the area at the time when the fire started."

Cal Fire crews along with neighbors and workers rushed to salvage what they could but losses are estimated at more than a quarter million dollars.

For Cal Fire a stressful firefight as crews were forced to make 30 minute round-trips just to get water to the scene.

Rahn said, "Due to the minimal water resources in the area water tenders are needed to go back and utilize hydrants were typically we would have canals in the area where we could draft water out of."

The burning smoke will contribute to pollutants in the air, public health experts say and depending on the winds different communities in the Valley May see poor air quality. Luckily Cal Fire crews contained the fires and no buildings were destroyed.

Rahn added, "Due to the drought were trying to use modified tactics to try and conserve as much as water as possible."

The fire will burn for several days because of how dense and tightly packed this hay is. Local firefighters say they'll be working with the dairy farmer to keep an eye on the wreckage.

800 tons of hay is destroyed. Cal Fire says it was started by mechanical equipment. @ABC30 pic.twitter.com/qh5nXBEewJ

Its estimated this farmer lost about $300,000 worth of hay. Would feed his cattle roughly 6 mos - per CalFire. @ABC30 pic.twitter.com/bjPc5YWJfe

NO WATER in canals so it's been about a 30 min round trip for water for crews. That's with lights and sirens. @ABC30 pic.twitter.com/3e4bi0b0BQ

We can hardly breathe with all this smoke. Can anyone see the smoke from the 99 or the 59? @ABC30 pic.twitter.com/CBayqqnL0k

About 600 tons of hay burning near Merced at a dairy farm. @CalFire working with owners to get fire contained. @ABC30 pic.twitter.com/TkSEOiUbkb