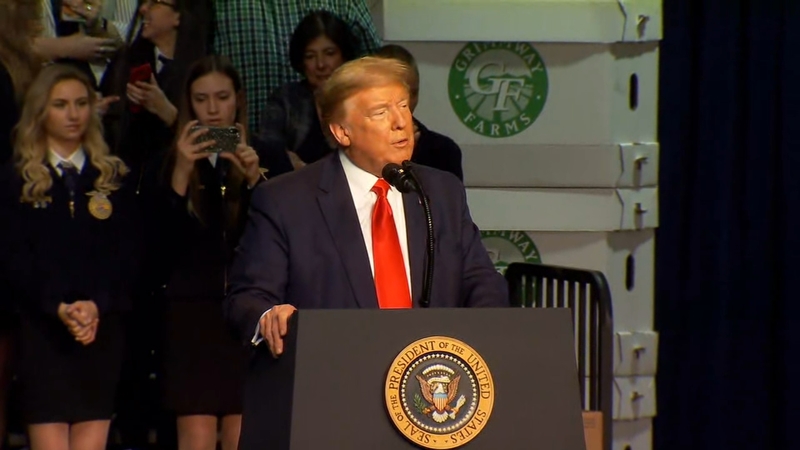 President Donald Trump on Wednesday honored the two firefighters affected in the deadly blaze at the Porterville city library.

Trump was in the Valley, speaking to farmers in Bakersfield about efforts to improve the supply and delivery of water in California and other western states.

But he began by paying his respects to the two firefighters.

"I heard they were two great people, people with incredible families and I just want to pay my respects to their families and friends," he said. "It's a tough job, we just met some of the firemen backstage, it's a tough and dangerous job. And the country respects that profession very much... and you can add the words 'law enforcement' to that group."

Earlier in the day, California Governor Gavin Newsom's office tweeted out its condolences to the City of Porterville and to those affected.

We are deeply saddened to learn of the loss suffered by the Porterville Fire Department while fighting a library fire last night. Our sincere condolences go out to the families and friends impacted, and to the entire City of Porterville.

— Office of the Governor of California (@CAgovernor) February 19, 2020

On Tuesday night, even as dozens of fire crews were battling the flames hours after the blaze began, the death of Captain Figueroa and the fact that Jones was still 'unaccounted for' had already begun sending out ripples of shock and grief among the Valley's law enforcement personnel.

Agencies in Tulare County and beyond posted messages of grief and support for the Porterville Fire Department and the families of both firefighters.

Among the first to express their condolences was the Fresno County Fire Department, whose personnel rushed in to help Porterville Fire when they called for help.

CAL FIRE and Tulare County firefighters were also among the more than 50 officers trying to control the deadly flames.

Today we mourn the loss of fellow firefighters from the Porterville City Fire Department who were courageously serving their communities while battling a structure fire. Join us in keeping them, their department, their families, and their friends in our thoughts during this time. pic.twitter.com/AVPRmnKxW4

The Tulare County Sheriff's Office wrote on Facebook, "We are absolutely heartbroken over this tragedy and ask that you keep the families of the two firefighters, as well as their friends and colleagues, close to your hearts."

On Wednesday, the Porterville City Fire Department thanked the community for their outpouring of support and said it was working on a way to accept donations.