A large stretch of Friant Road was shut down as crews battled the flames, and traffic was backed up for miles.
KFSN 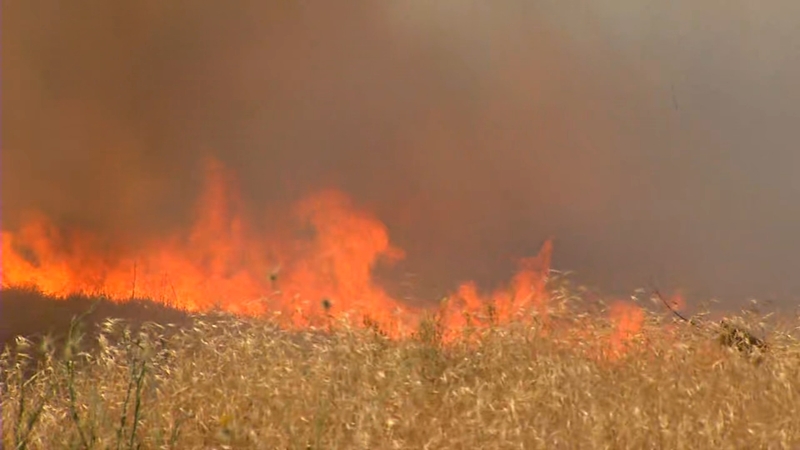 CAL FIRE said it started as a commercial fire near Friant and Rice roads at about 4 pm.

CAL FIRE said the incident started as a commercial fire near Friant and Rice roads and has spread to vegetation.

At the height of the evening commute, cars were backed up and traffic had to be diverted as smoke blew over busy Friant Road, then flames got too close for comfort to nearby homes.

Authorities told residents to shelter in place because of blowing embers and smoke.

The fire burned through 62 acres of dry brush and vegetation.

CAL FIRE, Fresno and Clovis Fire Departments as well as the Air National Guard all responded to the busy area near Woodward Park and the Fort Washington neighborhood.

ABC30 insiders shared eyewitness accounts and their own video when flames first ignited near an industrial dump.

Action News insider Eutimio Torres called into our coverage with his first-hand account of seeing the beginning of the fire before he rushed away from the scene.

He witnessed what's likely the start of the blaze at what appears to be Republic Services, known to many as the 'Rice Road Dump'.

Like other businesses, Torres was hauling a load to the dump when he says the smoke begin to rise then the business' own employees quickly jumped into water trucks to try to put out the flames themselves as fire crews were arriving.

No evacuations were ordered and no one was hurt.

Fire investigators have not revealed the cause of the blaze yet.