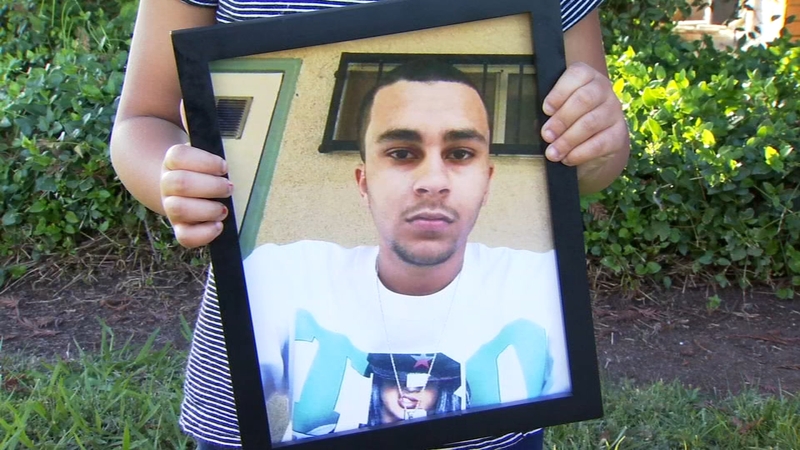 FRESNO, Calif. (KFSN) -- 20-year-old Tyrell Truss was killed in his own car in Firebaugh on Thursday night and his family says he died because of his kindness.

Investigators say four suspects robbed the young father and took off running before police caught up with them.

Three of the people arrested for the shooting were visiting from Sioux City, Iowa.

The other is from Firebaugh.

But now they are in custody after allegedly murdering a man who investigators say was simply giving them a ride.

Brenda Beard says her 20-year-old son did not have a mean bone in his body.

She doesn't understand why someone would kill her loving son, who was a father to a 4-year-old little girl.

"And they left him there to die in the streets by himself," she says.

The Fresno County Sheriff's Office says itis all started Thursday, when Truss drove up to Mendota to meet a woman he started talking to online.

According to investigators, that young woman introduced Truss to three of her friends and asked if he would take them to Firebaugh.

At some point during that trip, an altercation inside the vehicle took place.

One of the men, 18-year-old Isaac Helms, allegedly fired a gun, killing Truss.

"After interviewing them all night we get the story straight that they did plan together to rob him and it ended up in this murder," says Tony Botti of the Fresno County Sheriff's Office.

A murder that has broken Truss' older sister.

"I just feel like my protector is gone and I'm never going to get him back," says Shayna Truss.

And his daughter Sophia will never get him back too - something her mom Stephanie is struggling to accept.

"She'll ask me, 'Where is daddy?' 'I don't know where daddy is, Sophia, because they took him away. Some bad people took him away'."

While Truss' loved ones try to find comfort with each other, his mom is doing the best she can to stay strong.

But she wants the people responsible to know they murdered a man who loved his daughter, his family and his life.

"They'll get what they deserve one way or another," she says.

All four suspects have been arrested and charged with murder.