KFSN
By Sontaya Rose
FRESNO, Calif. (KFSN) -- Fresno firefighters say dry conditions and wind have helped fuel dozens of grass fires in the past few days, and they say motorists may not realize their cars may also be adding to the risk.

Firefighters are chasing freeway fires more than they like, and there's plenty of dry brush to keep them on the move.

This year, late spring rain added to the widespread grass growth, then wind dried it all out.

"A piece of your catalytic converter can come out of your tailpipe and start fires, or you can have chain drag. But what kind of sets that up is the fuels alongside of roadways are kind of ripe for fires to start," said Deputy Fire Marshall Jay Tracy.

Fire investigators say two fires last weekend off Highway 41 along the San Joaquin River were related, but they may never know what car or person caused them.

"We do believe that there's a communication between the two of them, meaning it was the same incident that started both of those fires. Arson has not fully been ruled out- but it's still a possibility but a very low possibility at this point," Tracy said.

Vegetation fires are a great concern for firefighters because of the additional hazard caused by nearby traffic.

A study by the National Safety Council in 2019 revealed 71% of drivers admitted to taking pictures while driving by emergency crews, and 60% said they immediately posted it to social media. Local firefighters say video of fire scenes can be valuable to them when it's taken from a safe spot by a driver who isn't distracted.

Despite the shelter in place order still in effect, house fires are down slightly. Cooking and kitchen fires are still happening, but not doing as much damage because residents are jumping into action.
Report a correction or typo
Related topics:
fresnobrush firefirefirefighters
Copyright © 2020 KFSN-TV. All Rights Reserved.
FIREFIGHTERS 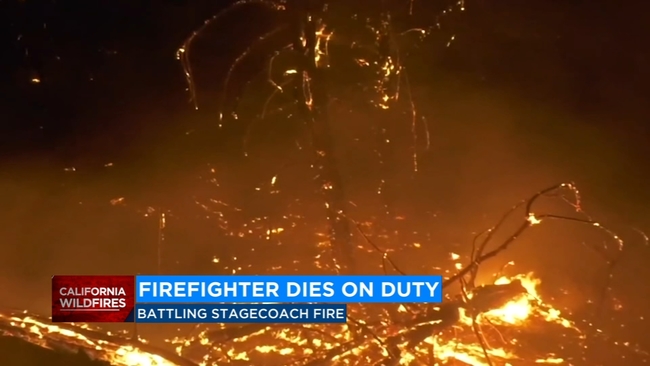