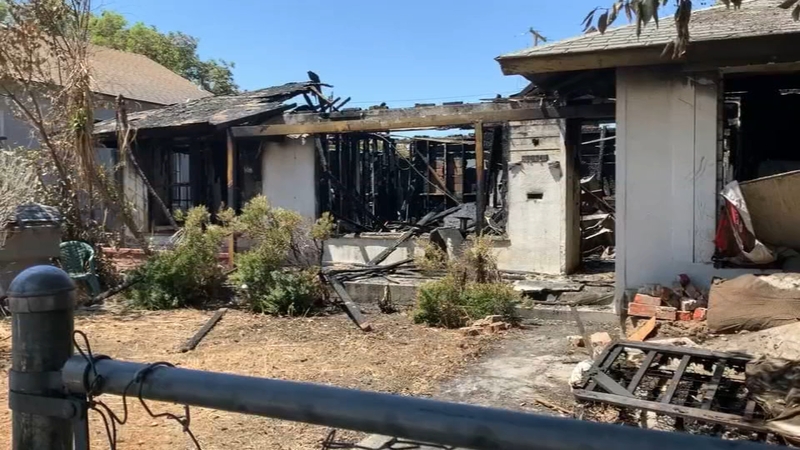 FRESNO, Calif. (KFSN) -- "Worry sets in as a mother because how often do I have to deal with this," says Genesis Brown. "Do I need to uproot my family because of this?"

Four days after flames destroyed the vacant home next door, Brown is finally able to bring herself to talk about the terrifying moments she and her family escaped danger.

"You hear the boom and there's flames, balls of smoke and big gray smoke clouds," she said. "You don't know what to do at that time. You just go."

She says she's reported the homeless activity next door to the city of Fresno multiple times.

"When is someone going to open their eyes and say we need to do something about this," she said. "We need to step up as a community even to make sure the homeless or drug addicts are not in here."

Fresno County is holding the property as it remains in probate.

The city attorney's office says the location has already racked up more than $1,100 in fees.

"The fact that I could possibly lose my child because of somebody else's carelessness," she said.

Fresno Fire PIO Shane Brown says this is just one of more than 1,100 fires this year caused by homeless activity, an almost 76 percent increase year over year.

"The resources we have for the fire department are pulled away to fight these really unnecessary fires caused by careless negligence," he said. "Many of them are intentionally caused."

The department is creating a new system to map fires by cause, and it shows vacant homes aren't the only places they see fires started by homeless activity.

"You can see how it makes a map of the highways in our city," Brown said.

With just 80 firefighters to protect the entire City of Fresno each day, resources are taxed by these types of fires.

As crews tackle a fire, the department needs to move engines around the city to reduce response times.

They aim for a four-minute response. Any longe. and a fire can become much more dangerous.

"The danger that poses to the firefighters but the potential to spread to the neighbors increases because a condition called flashover starts to happen," Brown said.

The department gets an average of 120 calls per day, which includes medical calls, where response times can mean life or death.

"Within four minutes, irreversible brain damage can happen without oxygen," Brown said. "So when we get a call for cardiac arrest, the goal is to have us on scene providing oxygen."