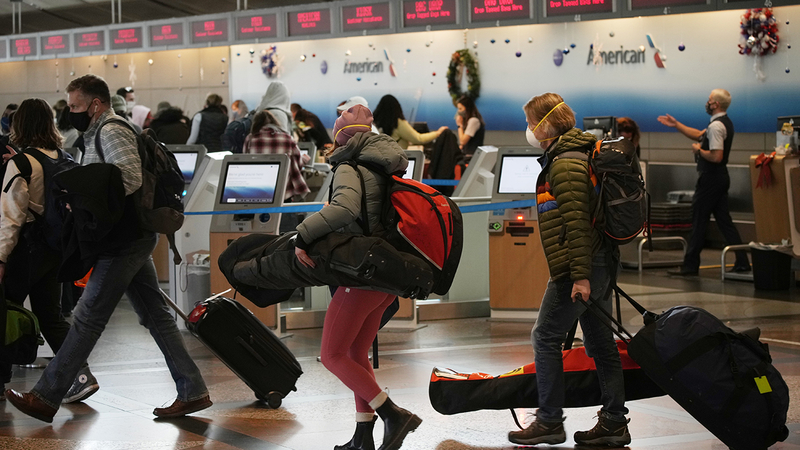 NEW YORK -- The Grinch is continuing to wreak havoc on air travelers, as more than 1,100 flights within, into and out of the U.S. were canceled Monday following thousands of cancellations over the holiday weekend.

Airlines canceled more than 4,000 flights since Christmas Eve as the recent omicron-fueled COVID-19 surge has resulted in crew shortages and disrupted several airlines.

A combined 1,700 flights were canceled on Christmas Eve and Christmas Day.

"We've got to make sure employees don't feel pressured to come to work when they've been exposed to COVID or they think they may have the symptoms," said Captain Dennis Tajer, a spokesperson for the Allied Pilots Association.

The cancellations come at the busiest time of year for air travel. The Transportation Security Administration said it screened millions of people each day over the holiday weekend, peaking at 2.19 million travelers on Thursday, Dec. 23. On Wednesday, more people passed through TSA checkpoints than on the same day in 2019.

Delta and JetBlue have called on the U.S. Centers for Disease Control and Prevention to shorten the quarantine period for vaccinated individuals to five days, to ease the crew shortage. Many airlines are also offering bonus payments to employees to cover extra shifts to avoid more cancellations.

Airlines say winter weather is also playing a role in some of the chaos.

Passengers are urged to check with their airlines and airports for up-to-date information on their flights.

"If you schedule more airplanes than you have pilots for, then that's just a recipe for disappointment on all sides."