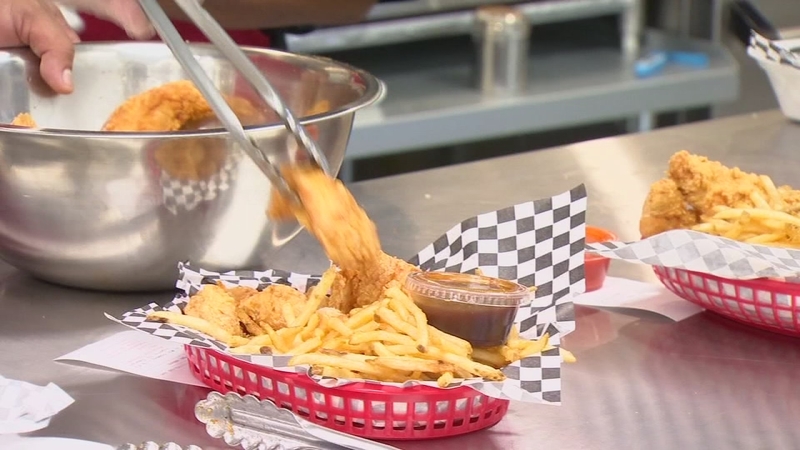 FRESNO, Calif. (KFSN) -- The buzz has been building on social media all week. It's not your usual shack. This place is called "The Chicken Shack".

The restaurant just opened up at the corner of Fulton and Mariposa in Downtown Fresno. Owner Damon Miller already had a successful Chicken Shack in Hanford. He's already seen the excited here in Fresno firsthand.

"We opened at 10 today and there was a line out the door at 9:30 a.m. I didn't want them to wait outside so I opened the door and let them come in."

And there's one item on the menu that rises above all others.

The buzz has been building on social media all week. It's not your usual shack. This place is called "The Chicken Shack".

Plus, they have more than just a secret sauce, according to Miller they have "we have over 30 sauces."

They're always making more sauces depending on the occasion. BBQ, ranch, szechuan, and many more. But, they have one sauce that's really hot.

"We also have a hot that's abbreviated HFS. In Hanford, it was for Hanford Fire Sauce. Here we'll make it, Hot Fulton Sauce," said Miller.

And the chicken? Its hand breaded daily and made to order.

"We use fresh chicken. We don't use frozen chicken. Freezing it changes the density of the chicken, the moisture and it makes it drier," said Miller.

We caught up with some of the folks in line to find out what brought them in.

Linda Silveira from Hanford said, "It was something new, and the chicken is delicious. Well, it's near Grizzly Stadium which is great."

Then we got to see first-hand how quickly word of mouth can spread.

Brandon from Fresno said, "See that big old guy right there? Him, he knows where all the food places are at."

That big guy is Brandon's friend Curtis Combs-- so we decided to ask him about The Chicken Shack.

"One of my friends came here, Tracy, and he recommended that we come here. 'Why' he said they got good food."