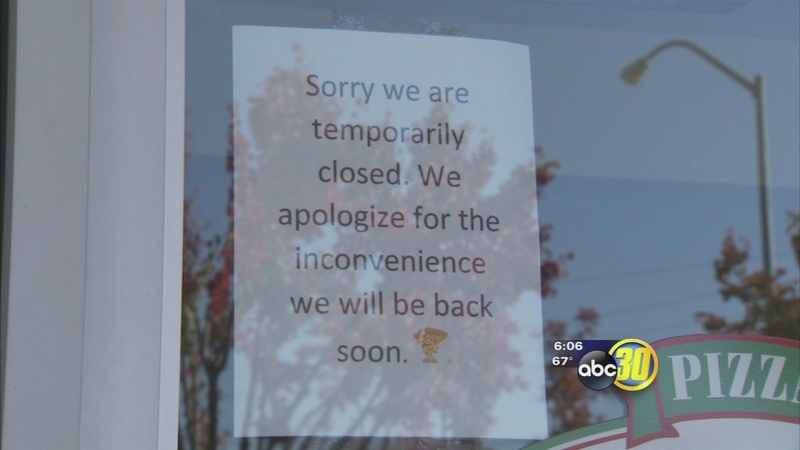 FRESNO, Calif. (KFSN) -- Families who want pizza for lunch or dinner now have one less option in Fresno and Clovis.

Three Papa John's restaurants have been closed. Former employees were all of a sudden seeking new jobs right in the middle of the holiday season. The restaurant closures caught many by surprise.

The three Papa John's locations in the Fresno area had notes taped to the door saying "Sorry we are temporarily closed." Inside, pizza boxes still stacked up. The closure of the Champlain and Cedar restaurant came as a surprise to neighboring business owner Chris Osborn who owns Ozzy's Sports Grill.

He did not like to see the restaurant shut down. Osborn said, "Absolutely not. It hurts all of us in the shopping center when a place closes like this."

Preferred Restaurant Brands of Las Vegas is the franchisee of the Fresno area restaurants. We were told by someone in their office the closures were temporary - that a change in suppliers was being made. But a Papa John's spokesperson said in a statement, '"All three stores are closed. As of now, there are no immediate plans to re-open."

The Shaw and Brawley location opened less than a year ago. PG&E shut off the power here saying the business owed more than $7100 on its electric bill. Osborn felt bad for employees who have lost their jobs. He said this shopping center has lost a valuable tenant. "At night when our kitchen closed at 10 o'clock what we'd do is encourage our customers if they wanted to get something to eat we always called over here and they'd deliver a pizza over to one of our customers so it worked out real well."

Neighbors of the Papa John's locations told us the restaurants were open on an inconsistent basis over the past few weeks.
Related topics:
food & drinkfresnoclovisclovisfresnostore closingpizzarestaurant
Copyright © 2021 KFSN-TV. All Rights Reserved.
FRESNO