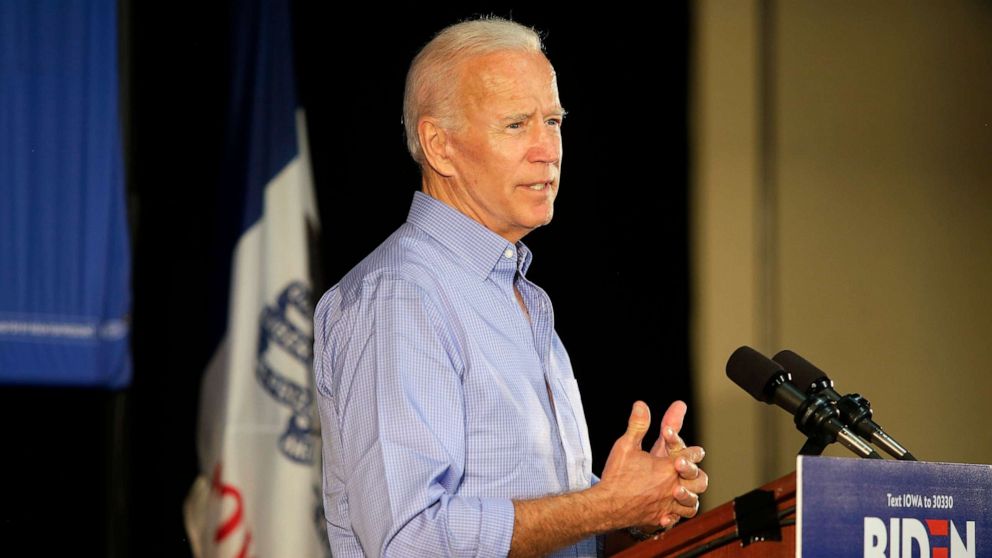 Former Vice President Joe Biden, in a speech unveiling his foreign policy plank on Thursday, drew a sharp contrast with President Donald Trump's approach to dealing with leaders, such as Russian President Vladimir Putin and North Korea's Kim Jong Un, and slamming the president for diminishing the standing of the U.S. on the world stage.

The former Vice President slammed Trump's actions in office, saying the United States only has "one opportunity to reset this democracy after Trump."

"If we give Donald Trump four more years, we'll have a great deal of difficulty if ever been able to recover America standing in the world and our capacity to bring nations together, which is desperately needed. And I think it'd be catastrophic to our national security and to our future. We can't let it happen," Biden said Thursday.

Biden, who has faced criticism in recent weeks over his past stance on busing, and comments on working with segregationists senators, placed a heavy focus on the failure of the current administration -- a tactic the Biden campaign has used in other instances to focus on a Trump versus Biden match-up.

"Folks, American foreign policy, I think, has to be purposeful and inspiring. Based on clear goals, driven by sound strategies, not by Twitter tantrums. And the overarching purpose of our foreign policy, I believe, must be to defend and advance our security, prosperity and democratic values that the United States stands for."

"Every president, Democrat and Republican, in modern history prior to Donald Trump has understood and carried out this basic directive, often imperfectly," the former vice president said. "But we've never before has it been so thoroughly abandoned."

On the trail, Biden often speaks about his foreign policy credentials earned during his time in the Senate and the White House. Biden served as the highest ranking Democrat on the Senate Foreign Relations Committee for 12 years and dealt with foreign policy during his eight years serving as vice president to President Barack Obama.

In his remarks on Thursday, Biden made it clear that he was betting on foreign policy playing a role in people's 2020 vote.

He laid out several concrete actions that he would take in office to undo actions undertaken by the Trump administration, including ending family separation at the southern border and President Trump's travel ban on seven majority Muslim countries.

The former vice president also detailed actions he would take under the main pillars of his foreign policy vision -- "repairing and reinvigorating" U.S. democracy, while strengthening democracies around the world; helping the middle class succeed in a global economy with a "foreign policy for the middle class" and taking a leadership role to coordinate global action on global threats unique to this century -- including climate change, mass migration and nuclear threats.

In addition, Biden said he would 'end forever wars' in Afghanistan and the Middle East, as well as end U.S. support of the Saudi war in Yemen and his plans to deal with the Iran nuclear deal, tensions with Russia and North Korea and the Paris Climate Accord.

Ahead of the speech, a senior adviser said that Biden -- who has often touted his work alongside Obama during the campaign -- would not simply return to the foreign policy of the previous administration, but use it as a starting point, saying that the U.S. and allies would have to build upon and go further than previous agreements.

Biden displayed this in his remarks on the Iran nuclear deal.

"If Tehran returns to compliance with the deal, I'd rejoin the agreement and work with our allies to strengthen and extend it, while more effectively pushing back against Iran's destabilizing activities which under the agreement we were allowed to do," Biden said, but did not provide details on how he would expand the deal.

Biden also spoke about his career of working on nuclear proliferation, saying he "understand what's at stake, and understand the consequences of failing to act."

"I will empower our negotiators to jump-start a sustained coordinated campaign with our allies and others including China to advance our shared objective -- and it is a shared objective--of a denuclearized North Korea," Biden said.

I'll pursue an extension to the new START treaty, an anchor of strategic stability between the United States and Russia, and use that as a foundation for new arms control agreements," Biden continued, adding that he believes the U.S. nuclear arsenal should be used as a deterrent, and only used to retaliate if "necessary."

Biden also previewed plans for two global summits that he would convene while in office -- one to deal with global carbon emissions and one of democracies from around the world to "strengthen our common resilience and to work more effectively together."

In the latter summit, Biden will also challenge private businesses to engage in the discussion, and charge tech and social media companies to "make their own commitments to make our democracy more resilient, and also to deal with the way technology is being abused in other countries -- for surveillance states facilitating repression and censorship, spreading hate, spurring people to violence," a senior Biden official said.
Report a correction or typo
Related topics:
abc newsnational
Copyright © 2020 ABC News Internet Ventures.
More Videos
From CNN Newsource affiliates
TOP STORIES