Friends and family welcome 144th Fighter Wing back to Fresno 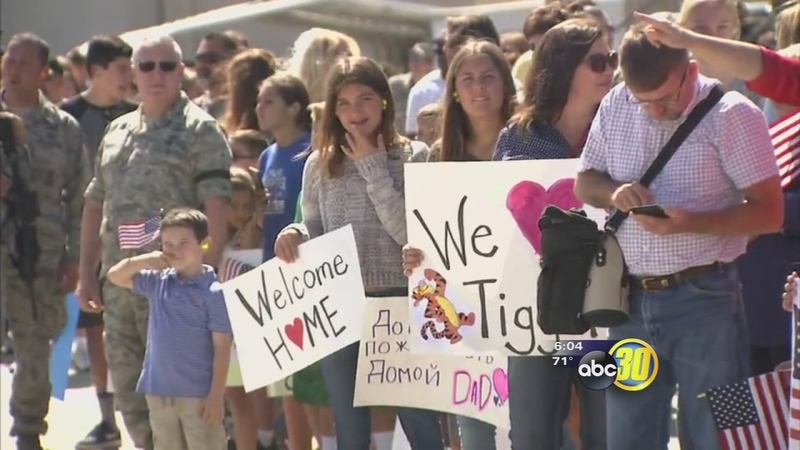 Friends and family welcome back 144th Fighter Wing to Fresno

FRESNO, Calif. (KFSN) -- More than 200 Air Force members of the 144th Fighter Wing returned home Sunday afternoon After spending three months in Europe. The flight home was over 17 hours and, for some of them, this was their first deployment but all of them are glad to be back home with their families.

The fighter jet carrying a group of F-15 pilots and more than 200 airmen landed safely at the Fresno Yosemite International Airport. The men and women had just wrapped up a three-month tour in Europe, spending time in places likes Romania, Bulgaria and Iceland.

Waiting for them as they walked onto American soil were family and friends, who were anxious for their return. Within the group of troops was SSgt. John Carlo Alonso. He said social media helped him survive being away from his wife and little boy.

"As long as we have Wi-Fi, we can communicate," he said. "So, I was on Facetime with my wife all the time and son, of course."

Alonso's wife is looking forward to catching up on lost time and recreating a big event her husband missed.

"He turned three while he was gone so we'll probably have a mini-party for him again a little cake or something," Veronica Alonso said.

CMSgt. Dawn Gillaspy said the trip was to show NATO that America is an ally and will be there for them. In doing that, Gillaspy said this squadron was also the first US forces to partner with NATO and sit 24/7 alert in Bulgaria for air policing.

"That's a big deal," Gillaspy said. "Because you don't usually go into those countries and sit alert so for us to be able to partner with Bulgaria and the leadership there that was a huge success."