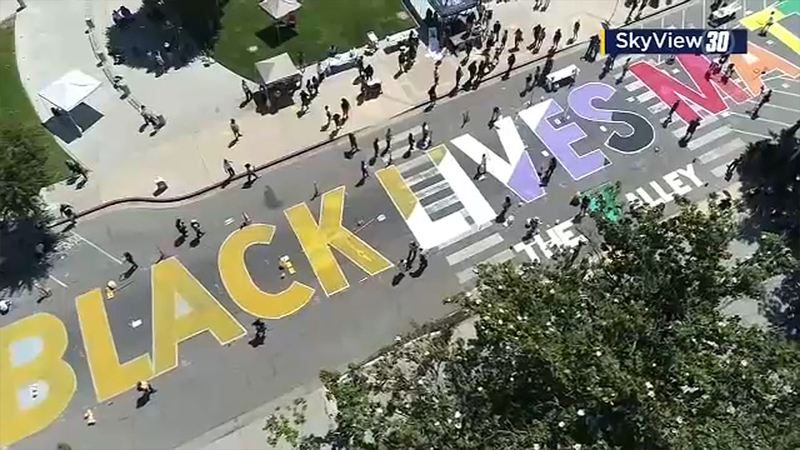 FRESNO, Calif. (KFSN) -- As protests nationwide demand an end to systemic racial inequality, the City of Fresno responded with a peaceful event designed to spotlight the Black Lives Matter movement.

City leaders joined members of the community for what was described as a street art event.

The idea was to draw attention in front of Fresno City Hall as a number of creative minds came together for one common goal.

Hundreds turned out Thursday to paint, chalk and just enjoy being together for a collective show of unity and support for the Black Lives Matter movement.

The city shut down the street in front of City Hall and provided the paint to spell out Black Lives Matter in bright bold lettering.

The art event felt more like a festival than a protest or rally.

Just about every walk of life was represented - young, old, many came to leave their mark, others were there to witness history and if you showed up to have fun, there was plenty of it too.

The City of Fresno paid for the supplies - the paint, brushes, and water bottles. Local activists pulled together the volunteer painters. The event was well-organized despite coming together in less than a week.

"This is not a victory, but a step in the correct direction. It's important that this took place on this day, the day before Juneteeth, that kicks off tomorrow. To show not only the community but the world that these things can take place," said organizer DJ Kay Rich.

Elected officials also voted to ban Fresno Police from using a type of chokehold called 'carotid restraint' to restrain people in the wake of the death of George Floyd.

"I'm proud that we're doing this with the artwork and we continue to stand with you as you protest and march in a peaceful way. I do want to make sure that you keep us accountable," said city councilmember Esmeralda Soria.

NBA star and Fresno native Quincy Pondexter also showed his support by picking up a brush and lending his artistic flair to the cause.

"How we've handled everything since the last month of George Floyd's passing has been great. It showed the resilience of our city and showed how our city can come together," he said.