Next to the canal along McKinley Avenue between Cedar and Millbrook Avenues is a homeless encampment.
KFSN
By Jessica Harrington 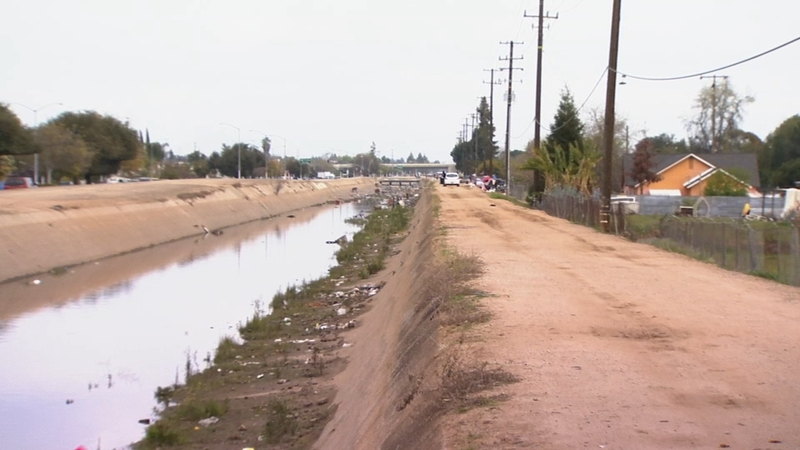 FRESNO, Calif. (KFSN) -- Trash is littered across a canal in central Fresno that carries drinking water and water for farmers.

There's also a homeless encampment nearby and neighbors are now sharing their concerns.

"It's amazement of what people actually throw away in there," said Joyce Friend who lives near the canal along McKinley Avenue between Cedar and Millbrook Avenues.

The canal has very little water in it, but it's filled with trash.

Next to the canal is a homeless encampment which is backed right up to houses in the area.

Neighbors say they don't have ill will toward people who are experiencing homelessness, they are just concerned about all that comes with it.

"I don't want them to be forced because they obviously have nowhere to go, but try to be more neat about your stuff," said Faith Bridges.

The councilmember for the area, Nelson Esparza, said he lives right next to the encampments and understands the frustration.

"We hear all of you," Esparza said.

Esparza said the district, which is in central Fresno, is challenged by canals, railroads and freeways - all places he said are conducive to homeless encampments.

The Fresno Irrigation District manages canals and Adam Claes, the assistant general manager, said this particular area is a hotspot.

He said the trash is a concern because the canals are used to move drinking water and water for growers.

With a limited budget and staff, Claes said it's hard to keep up with the clean up efforts. Claes said the FID has been working with the city of Fresno to come up with a long-term solution to keep the canals clean.

"I do not blame anyone for calling in and complaining because it is unacceptable," said Mayor Jerry Dyer.

Dyer said while cleaning has been underway across the city, getting to everything will take time.

Thursday morning crews were offering services and beginning to pick up an encampment on East Tyler Avenue near Cedar Ave., not far from the McKinley canal.

Not every person living at the encampments accepts services or a place to stay, some end up migrating to another location.

"Those are the individuals that are going to present us with the most challenge and we're just hoping to minimize the number of those people in our community," said Dyer.

Councilmember Esparza said the city will be giving the Fresno Irrigation District a chance to clean up this trash since it's their jurisdiction, but if they don't respond or aren't timely about it, the city will move in.