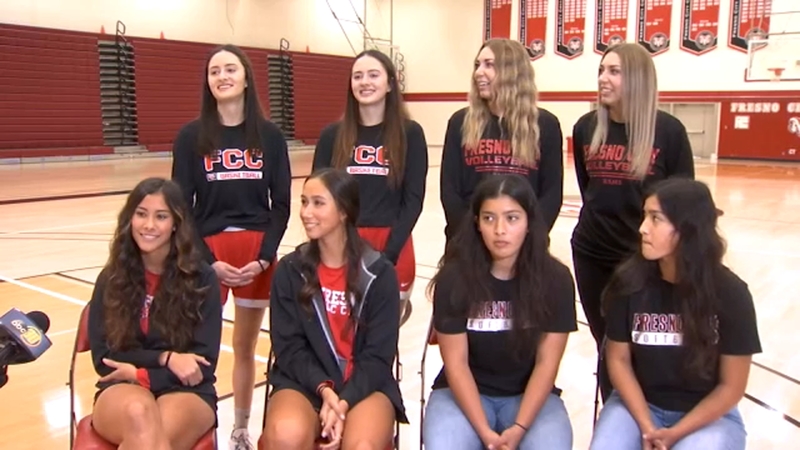 FRESNO, Calif. (KFSN) -- The chances of having twins are relatively rare. Even running into twins at the same time is highly uncommon.

But if you follow FCC women's sports these days, it might force you to do a double-take.

That's because four sets of twins, three of them identical, are proving to be absolute forces on their respective teams.

"Growing up together, we've always been together," says Lexi Pagani. "It's like having a built-in best friend."

That's Julia and Lexi Pagani - this dynamic duo shines on the Rams volleyball team after graduating from Buchanan.

"Since I'm a setter and she's a hitter, we do have a connection," Julia said. "So when I set her, she says she knows when I'm going to set her and she always gets a kill."

These eight women all say they can anticipate their sibling's next move and that has translated into success on the field or the court.

"I feel like every time we're playing, she's always trying to find me to pass the ball," says Sara Gribay about her sister, Sofia. "It's like a different level of trust."

"Sometimes, we'll dress the same just to see if people will get us mixed up and apparently, we sound similar too, so it just throws people off even more," Sara said.

While being a twin comes as second nature, they acknowledge there is a fascination for many with seeing double.

"Being a twin, you don't think it's so crazy, we're just twins," says Lexi Valencia. "But to other people, they see a picture of twins and they're all over it."

Coaching twins can be a blessing but it can also offer some confusion.

"The only time I get them mixed up is when I say I don't get them mixed up and then tell someone the wrong one, but they have such different personalities that talking to them and coaching them is different," says basketball coach Alex Fletcher.

Like all good things, at least one set of twins have decided this will be their last year playing together.

The twins are all helping their teams succeed -- soccer is on to the next round of the postseason after knocking off the top seed. Basketball has started 5-1 after winning the Sierra college tournament.