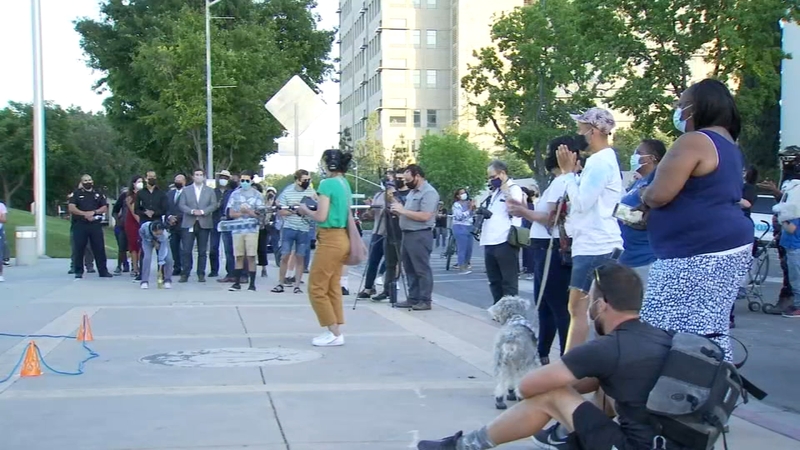 FRESNO, Calif. (KFSN) -- The Fresno State chapter of the NAACP hosted a gathering on Tuesday night to remember George Floyd while calling the jury's verdict to convict him the first step toward change in the country.

Reflecting on the historic verdict and looking ahead, community members gathered at Fresno City Hall around a portrait of Floyd.

"It gives hope now that police officers who don't do what they are supposed to do and end up committing a homicide, that they can be held accountable. And that means a lot to people like me because we don't see that often," said West Fresno Christian Center Pastor Jim Parks.

"We have our own issues. We have our own George Floyd case," said Fresno State NAACP President D'Aungillique Jackson, pointing to the death of Joseph Perez in 2017.

Recently released video from a Fresno police officer's body-worn camera shows him telling officers he was struggling to breathe while on the ground, being restrained, minutes before his death.

They sued all three entities and blamed bad training for creating the conditions for compression asphyxia.

"As community members, we are still hurting and though we can celebrate for the Floyd family, we can still be angry and we can still grieve our own loss and we can still push for change. We are not supposed to be comfortable right now," said Jackson.

"This is a precedent that we are going to hold onto so let's do that," she said.

May 31st will mark one year since protestors marched from City Hall to the police department after George Floyd's death.