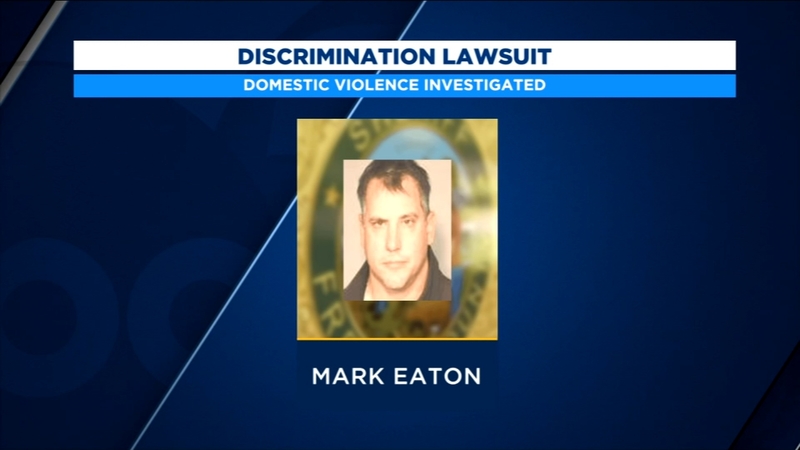 FRESNO, Calif. (KFSN) -- A Fresno County sheriff's deputy says her domestic violence report against a SWAT hero got her blacklisted and reprimanded.

"After all this happens, the victim, in this case, is being harassed, discriminated against, at least that's what she alleged," said Legal Analyst Tony Capozzi.

The deputy filed a lawsuit claiming sex discrimination, harassment, and civil rights violations by the Fresno police officers who investigated her crime report and several people at the sheriff's office, all the way up to Sheriff Margaret Mims.

In 2011, Governor Jerry Brown honored Mark Eaton as one of the heroes in the Minkler shootout that ended in death for deputy Joel Wahlenmaier and Reedley officer Javier Bejar.

Four years later, he was in police custody after a fellow deputy accused him of domestic violence.

A Fresno County sheriff's deputy says she's suffered discrimination, harassment since reporting a fellow deputy for domestic violence.
How she says police helped her attacker get information off her phone, at 6 @abc30. pic.twitter.com/RoFr0snnfe

Christine Versola said Eaton "grabbed her face and nose and squeezed as hard as he could while choking her."

In a lawsuit filed this summer, she says reporting Eaton led to harassment and discrimination on the job.

"It's hard to believe that she's being harassed simply because of the allegations she made against the deputy, but if that's the case, it would've been unreasonable and she should collect damages for it," Capozzi said.

As part of the investigation, her attorney says Versola gave Fresno police permission to check her phone only for text messages related to the incident.

But she says police investigators dug deeper and extracted everything from her phone.

From there, she says "Eaton then obtained Versola's private data that should not have been obtained."

Soon afterward, she was the subject of an internal affairs investigation based on what he saw as a threat against him.

Legal Analyst Tony Capozzi says if she gave limited consent to search the phone, the investigators may have violated her civil rights.

"Why would she give information to go beyond what was involved in the domestic violence case, doesn't seem plausible or reasonable that she would've done that," Capozzi said.

Versola's attorney says nobody got a warrant to search her phone, but the office reprimanded her for what they found in it and they've tried to make her miserable ever since she reported Eaton.

In 2016, as part of a deal with prosecutors, Eaton pleaded no contest to a misdemeanor charge of using his phone with the intent to annoy.

The charges were later dismissed after he completed a yearlong batter's treatment program.

The city of Fresno did not want to comment on pending litigation, but the sheriff's office sent Action News a statement saying "We have reviewed the court documents and are disputing the allegations."