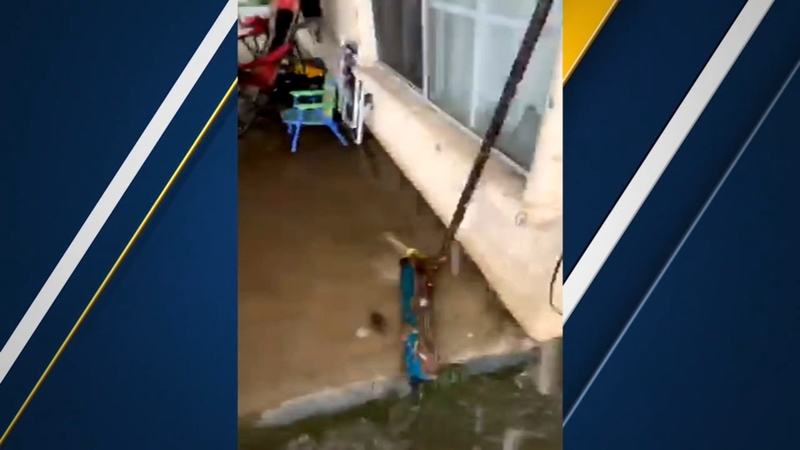 PARLIER, Calif. (KFSN) -- Some residents of Parlier are still out of their homes after significant flooding in parts of the city on Sunday.

From beginning to end, Elizabeth Tienda documented what happened.

It started with heavy rainfall.

But within minutes, water had filled her front yard and surrounded her home.

"It's like a waterfall going into the basement," Tienda is heard saying on cellphone video.

"The streets get flooded--there's absolutely nowhere the water can go... It's going to look for holes in these areas. We have a basement-(it's a) perfect hole for it to go into. Once that filled up, then that's when it started creeping up into the home."

When water started to enter the home, Tienda took her boys to the backyard.

"The last thing that I wanted was for our flooring to collapse with it being a big pool of water and it being dark," Tienda said.

Some residents of Parlier are still out of their homes after significant flooding in parts of the city on Sunday.

Even on Monday evening, nearly everything Dario Moreno owns is sitting in a foot of murky water.

A basement - his home - is now left unlivable after strong Sunday showers caused it to flood.

Waters consumed items as big as his bed and as small as his toothbrush.

Moreno estimates about $1,000 in damages.

Since he doesn't have flood insurance, he'll have to pay out of pocket to replace what was lost.

"It came fast and it came hard, all at once," said Parlier City Administrator Sonia Hall.

Hall says the city will do what they can to help residents impacted by Sunday's strong storm.

"The city does have a rehabilitation program for the homeowners," she said. "And so that's exactly what we're going to do is we're going to make sure we put them up at the top of the list and try to get their homes rehabbed and at least get some flooring for their homes."

Hall says the homes that were affected are more prone to flooding because their foundation sits below ground level.

But Tienda believes the city could solve the problem by upgrading its storm drain system.

A special city council meeting is expected to take place on Thursday night.

There, councilmembers will continue to talk about how to help people like Tienda.

"And see if we can get the funding to be able to put some larger pipes in there and a couple of other storm drains to redirect the flow."

They'll also be looking at creating a fund for victims.