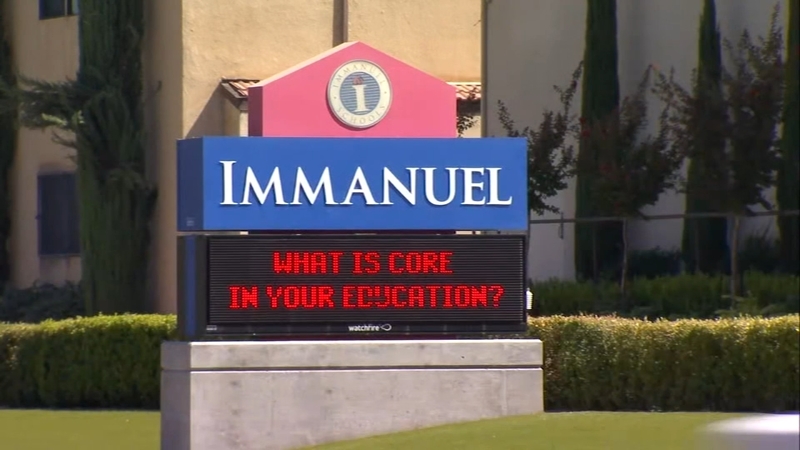 FRESNO, Calif. (KFSN) -- Fresno County and the state of California have reached an agreement with Immanuel Schools in Reedley that would end their court battle over students returning to campus.

Action News has learned, that as part of the proposed agreement, Immanuel Schools will follow the county's and the state's health safety mandates for schools returning to in-person instruction. That including a stricter masking policy, social distancing enforcement, and surveillance testing of adult staff.

Both sides will appear in court Tuesday to present their proposed agreement to the judge.

The K-12 schools have officially been operating legally since October 14 after initially opening in violation of state emergency orders.
Fresno County Judge D. Tyler Tharpe granted an injunction ordering the schools to close, but Immanuel stayed open, at that point in violation of a state emergency order, a Fresno County health officer order, and a judge's injunction.

The state attorney general's office got involved and asked for sanctions against the schools.

When Immanuel Schools brought kids back on campus in mid-August, it violated a state emergency order designed to cut down on the spread of coronavirus.

Legal analyst Peter Kapetan says the school's legal battle with Fresno County and the state raises interesting legal issues about how much power the state should have.

But at the time, he says the state had a better case for keeping schools closed.

"This was kind of a novel disease we were fighting and it was taxing the resources and so there was a heightened concern that this could spin out of control," Kapetan said.

Fresno County was averaging more than 300 new cases every day and had 300 confirmed and suspected COVID-19 patients getting hospital treatment back then.

The infection and hospitalization rates are about one-third as high now and the state has allowed all schools to bring students back on campus with certain health safety protocols.

And the government is backing off its legal fight with Immanuel, offering to drop its demands for financial punishment for the school's alleged contempt of court.

So Immanuel is now open for in-person instruction legally. They agreed to implement social distancing, to do surveillance testing on adult staff members, and to enforce a stricter making policy.

Those are the same protocols required of every reopening school in the county, and most of the Immanuel students we saw Monday wore masks even as they walked outside.

The judge could still find Immanuel in contempt and order sanctions for flaunting the court order.

"He's got to make sure that people understand when the Court gives orders, you've got to follow those orders," Kapetan said. "So if he felt that this was that egregious of a violation, then he may do something on his own. But I seriously doubt that would be the case in this matter."

The two sides will find out when they meet in court Tuesday morning under much friendlier terms than their initial meetings two months ago.