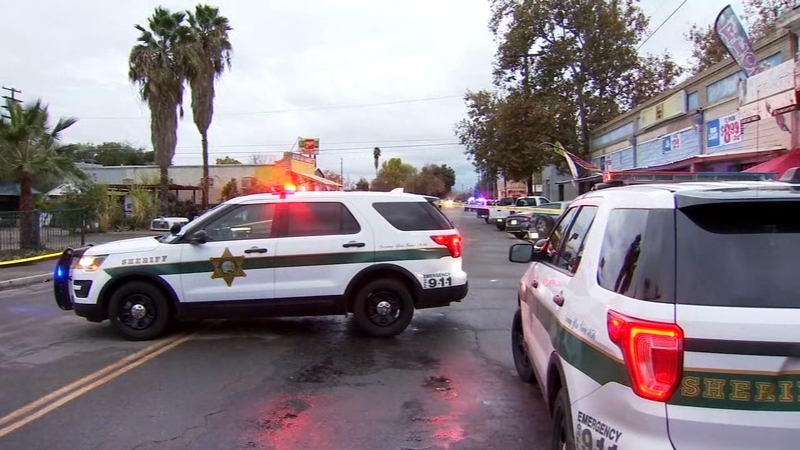 Video taken by a witness captures the devastating aftermath of the drive-by shooting; three men left on the ground after a gunman fired several rounds from the back seat of a car at around 3:30 p.m.

Witness tells us she heard so many gunshots she couldn’t count. She tells us a group of people usually hang out in front of the convenience store. https://t.co/0SbIcfb7Xh

"When people do drive-bys they really don't care about what or who they hit," said Tony Botti, public information officer for the Fresno County Sheriff's Office. "They basically just spray the area, trying to hit people they're after."

Two of the victims were struck in the legs and treated at the scene. The third was hit in the upper body and airlifted to the hospital in critical condition. Their ages ranged from late teens to early 20s.

According to detectives, as many as four people were in the suspect car -- described as a black Mitsubishi Galant. The shooting may have been targeted. Deputies say people usually gather in the alley near Morro and Portola, where the shooting occurred.

Investigators say the shooting could be gang-related.

"We do know that Del Rey has gang activity here in the town, so that is definitely something we're going to take a look at," Botti said.

Neighbors in the area didn't want to speak on camera for fear of retaliation. One of them says her daughter was at a neighboring business. She saw the shooting and took off, running in fear.

Another says she heard so many gunshots she couldn't count.

Sheriff's deputies are assuring the community they are doing what they can to catch those responsible.

"That is definitely something that we want to get our arms around right now, is to ensure the community how serious we take this and get these people into custody so they can't do this to somebody else," Botti said.

The Fresno County Sheriff's Office will have increased patrols in the area.