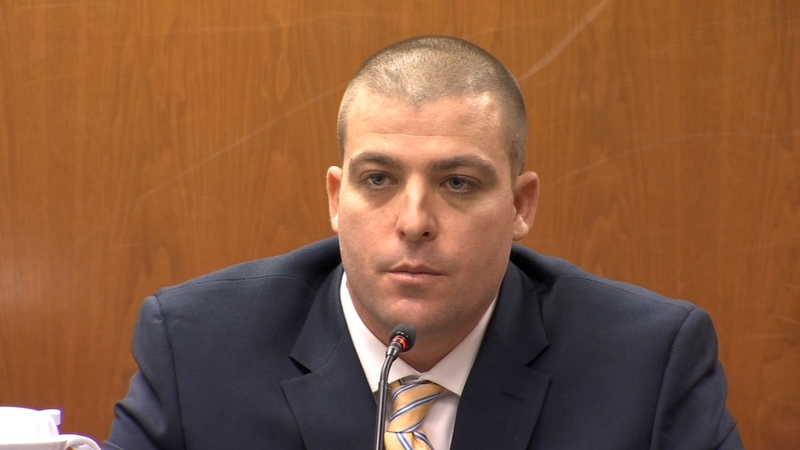 FRESNO, Calif. (KFSN) -- A former Fresno County sheriff's deputy charged with manslaughter in the accidental death of his supervisor says his hands are clean of any crime.

"I didn't shoot Rod and the gun wasn't in my hands when it went off," said Jared Mullis.

Mullis testified in his own defense Wednesday as his trial nears the end.

Mullis says he saw Sgt. Rod Lucas drop his gun more than once, so he offered to show Lucas his new holster in October 2016.

Seconds later, a gunshot killed Lucas and led to manslaughter charges against Mullis.

"I pulled the drawer open, turned towards my drawer, grabbed it with my left hand, handed it to him like that," Mullis said as he demonstrated his version of the holster handoff.

He says he made the handoff with the muzzle up and the handle towards his supervisor.

"I handed it to Sgt. Lucas," he said. "He reached and grabbed it, took possession of it. I released."

He says he didn't see the deadly shot, but he's lost sleep over what he did see.

"I remember thinking to myself, 'Oh man, he's in trouble. He's got some explaining to do,'" Mullis testified in his first public comments about what happened.

"And as I turned to look back at him I saw him clutching his chest."

Other deputies say Mullis demonstrated the holster to Lucas, which he says he doesn't remember, or that he pointed the gun in Lucas's direction as he handed it off.

None of them say they saw the shot fired, but one said it was just moments after he saw Mullis motioning towards Lucas with the gun and holster.

Prosecutors questioned why Mullis unloaded the gun and put it away while people tried to saved the sergeant's life.

"When I saw it, it was on the ground kind of at everybody's feet," Mullis said.

"There were a bunch of people in there, coming and going. It had already gone off once. I didn't want another accidental discharge to happen."

Testing revealed no DNA or fingerprints from Lucas on the weapon, but Mullis says he followed firearm safety rules ingrained in his head.

"Treat every gun as if it's loaded," he said. "Don't point it at something you don't intend to destroy."