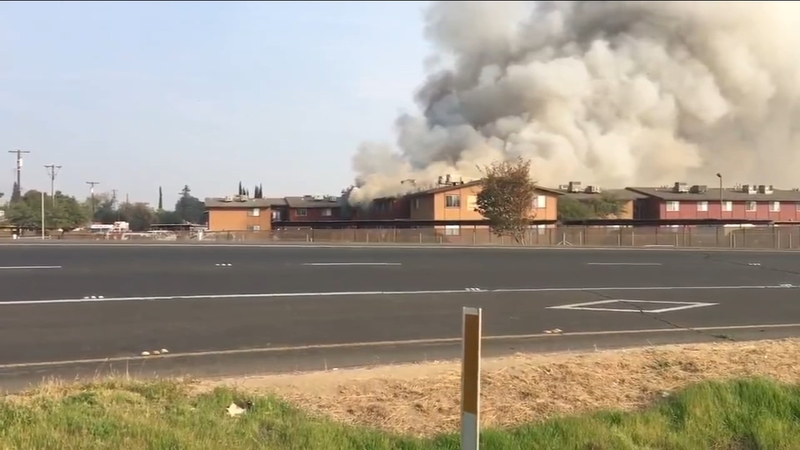 FRESNO, Calif. (KFSN) -- In the back of an ambulance, Aron Jenkins spoke to Action News as he was getting treated for his injuries from a raging two-story apartment fire in East Central Fresno.

A fire he says started in his kitchen.

"I was going to make some hash browns," said Jenkins.

Jenkins says after making the food for his mom. The two of them walked to a nearby store.

But when they returned their unit was up in flames.

"I tried to go through the window it burst (and) cut my arm. I was trying to make sure nobody was in there," Jenkins said.

Fortunately, everyone made it out alive but the scorching fire was increasing by the minute.

An ABC 30 insider captured video showing the flames raging through 12 units, leaving them with significant damage.

Even displacing dozens of residents like Antonio who is now without a home before the holidays.

"It's going to be really really hard there is nothing like right now that I can do I have like $5 to my name I don't know how I just lost everything in a couple of seconds," said Antonio.

April Magano is feeling the pain from the devastating loss too.

But she is thankful firefighters were able to save the ashes of her father, a Vietnam vet.

"The fireman I told him to get my dad's ashes and he went and got his ashes for me," said Magano. "that's all I was worried about, that was my best friend and I just wanted to make sure I saved his ashes."

And while firefighters worked into the night to put out the hot spots, Jenkins accepts his possible role in the fire but is only thinking about what his neighbors have lost.

"I apologize to everybody for probably leaving my stove on," said Jenkins.

The American Red Cross says it is assisting more than 20 people as a result of this fire.